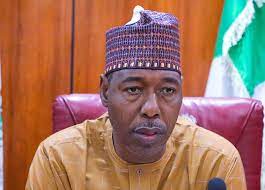 Governor of Borno State, Babagana Zulum  has signed the state Child Rights Protection Law and Violence Against Persons Prohibition Bill into law aimed at protecting the rights of children to education and parental care.

The governor stated that there was need for the bill to be signed because of the importance that his administration places on children rights and their welfare.

Speaking at the ceremony in Government House, Maiduguri, on Monday, Zulum, said that the laws were domesticated with the needed amendment to tally with culture, norms and tradition of the people of the state.

Zulum further stated that the laws were very important and that was why his administration sent them as Executive Bills to the State House of Assembly for domestication.

On his part, while speaking earlier, the state Attorney-General and Commissioner for Justice, Kaka-Sanda Lawan said that the laws particularly the Child Rights Protection law would ensure the protection of the rights of children to education and parental care because they are the future of tomorrow.

Also, the Speaker of the state House of Assembly, Kaka-Sanda Lawan, reiterated the commitment of the legislature to continue to work in harmony with the executive in passing laws that would impact positively and ensure that it speaks improvement on the lives of the people.