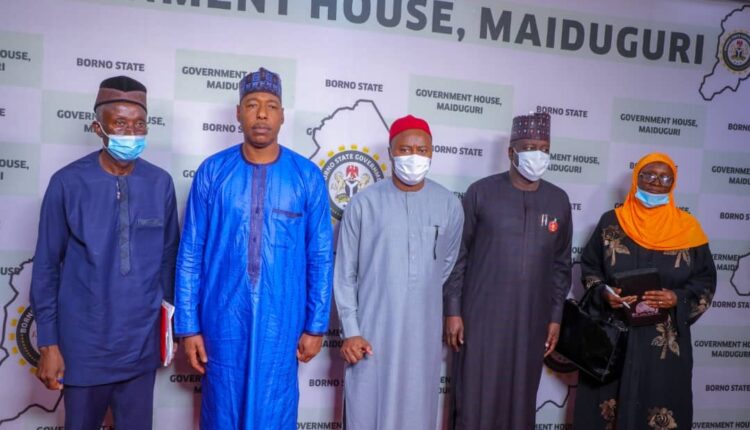 The Borno State Governor, Babagana Zulum, has urged the Federal Government to give special preference to Internally Displaced Persons (IDPs) in its selection of young farmers for the National Young Farmers Scheme launched last year by President Muhammdu Buhari.

He indicated that he had suggested the IDPs inclusion in line with the principle of fairness after the many travails they had gone through, adding that their selection would give them a sense of belonging and ease their repatriations and resettlement in their ancestral homes.

Zulum added that their selection, such that would allow the IDPs to undergo training and get equipped on food processing, among other farming activities, would serve as a launchpad for picking up pieces of their lives as well as augment his administration’s 25-years post-Boko Haram development plan.

Speaking on Wednesday when he received in audience the Executive Secretary, National Agricultural Land Development Authority (NALDA), Paul Ikonne, the governor noted that his administration was open for partnerships and investments from all sectors, adding that policies are being put in place to attracts investors and guarantee conducive environments for investments.

Meanwhile, Ikonne, on behalf of NALDA order for production of two million pieces of plastic sacks, mostly for 50kg capacity from the Borno State Plastic Company.

He said the gesture was in line with the apex government’s mandate to promote local content, adding with the recent resuscitation of the company, it becomes imperative for the agency to support the company.

“We have seen what you (Zulum) are doing, we have seen your factories and I want to inform you that in one of your factories, the sack manufacturing factory, NALDA is placing an order for 2 million sacks for packaging purposes for nationwide food program in which Borno has been selected as one of the pilot states.

Furthermore, the NALDA boss also informed Zulum that his visit was on Buhari’s directive with a mandate to reactivate all of NALDA’s farm estates abandoned in different parts of Nigeria.

Ikonne announced that Borno and one other state have been chosen as pilot states where 2,040 young people will be engaged in fish farming in Borno alone.

He noted that the 2,040 young farmers will be trained and properly equipped on fish processing and packaging under the National Young Farmers Scheme flagged up by the President, back in November last year.

In his response, Zulum, however, called on NALDA to accord special priority to internally displaced persons in the selection of young farmers to be trained and equipped on food processing, promising that his administration would work with the agency towards the successful execution of all interventions for the benefit of citizens.