Taliban celebrates US troops exit from Afghanistan after…

Exclusive: Lagos commercial bus drivers may down tools over… 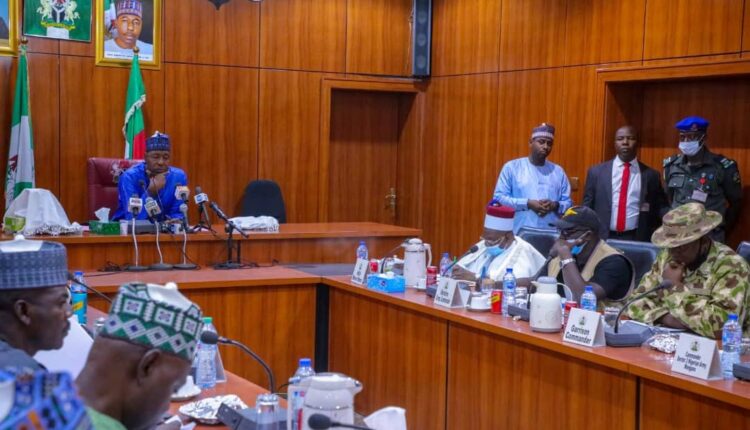 As part of measures aimed at curbing insurgency and other security challenges in Borno State, the Governor, Babagana Zulum, alongongside security chiefs in the state have met to strategize on approach to tackle insurgent attacks, kidnappings among others.

The meeting, which was first of its kind in 2021, was attended by the Deputy Governor, Umar Kadafur, heads of all military and para-military establishments, police and the DSS commands.

Others at the Tuesday closed-door meeting include the Shehu of Borno, Abubakar Elkanemi, Secretary to the State Government, Usman Shuwa, Head of Service, Barr. Simon Malgwi, Chief Staff, Professor Isa Marte, Commissioners of Justice and Local Government and Emirate Affairs, and the governor’s SSA on Security.

Before the meeting went closed-door, Zulum in his opening remarks, reiterated that the security of lives and property remains his number one priority, adding that his administration would stop at nothing in protecting the people.

He noted that the meeting had been called to ensure all stakeholders are on same page on issues bordering on insecurity and devise means to sumournt them.

“I will like to begin by reminding members that the security of lives and property remains the primary responsibility of any government as enshrined in the 1999 constitution of the Federal Republic of Nigeria as amended, which we all swore to protect, defend and preserve. With this in mind, we must reflect on how effective, timely, and precise in our collective efforts channeled towards upholding this singular but most important essence of governance.” Zulum said.

Furthermore, the governor gave an overview of some notable security issues in 2020 while calling on the council members to critically examine approaches and tactics used in the fight against insurgency in the state.

He added that it was imperative for all stakeholders to concentrate every effort and energy in finding ways and means of bringing insurgent attacks and kidnappings to barest minimum in the state.

Zulum also expressed gratitude to President Muhammadu Buhari, officers and soldiers of the Nigerian armed forces, and all other security operatives working in Borno for their efforts.

“The Government and people of Borno commend the relentless efforts of Mr President, Service Chiefs and sacrifice of the Nigerian Army in particular and other security agencies in general in the fight against insurgency. The fallen heroes and their families will always be in our mind,” Zulum said.