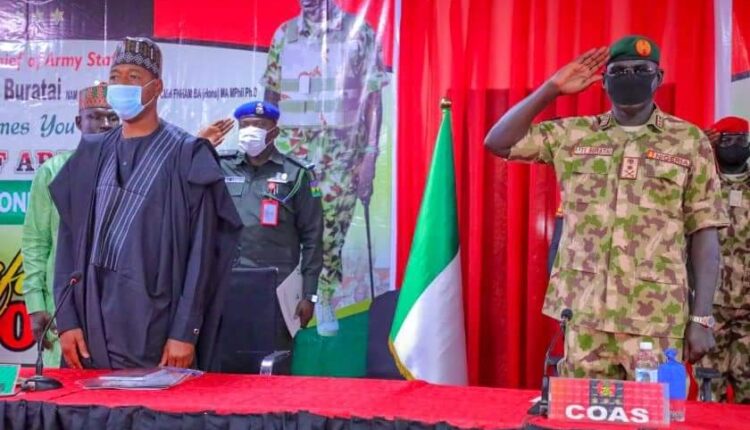 The Borno State Governor, Professor Babagana Zulum, has said that the country could win the war against Boko Haram and other murderous terrorists if the Nigerian Army could take the fight to the terrorists rather than be on the defensive.

The suggestion, he said, would be effective when used to augment other adopted strategies by military in the fight against insurgency across the country, adding that such would eliminate incessant attack by the insurgency as they would be forced to be on defensive rather than attacking.

The Governor said that though the Nigerian military’s counter-insurgency operations across the geo-political zones, particularly the northeast was commendable, there was need for the military to be on offensive rather than defending and repelling the terrorists.

Speaking at the 2020 Chief of Army Staff Conference for senior officers yesterday in Maiduguri, Zulum while assuring military of his continued commitment in the fight against insurgency, enjoined the Army to also adopt clinical clearance operation among their strategies.

“In line with my 10 cardinal agenda for good governance, Borno State Government shall maintain and sustain its role as key stakeholders in the activities and operations of Nigerian Army through provision of all the needed support and morale-boosting mechanism to all security operatives involved in the fight against insurgency to end Boko Haram crisis.

“I urge the Nigerian Army to take the war to all hideouts of Boko Haram. The army should not wait and give the insurgents the opportunity of first attack. You should as a matter of policy embark upon clinical clearance operation after successful execution of attacks,” Zulum said.

On his part, the Chief of Army Staff, Lt. Gen. Yusuf Buratai, while commending the governor’s resolve said that had been identifying with the Nigerian Army in the fight against insurgency in northeast.

“At this point, I want to thank His Excellency, the Executive Governor of Borno State, Prof. Babagana Umara Zulum, for honouring our invitation and for always identifying with us on the collective effort to defeat terrorism and criminalities in the northeast,” Buratai said.

21yrs-old man under detention after stabbing landlord to death