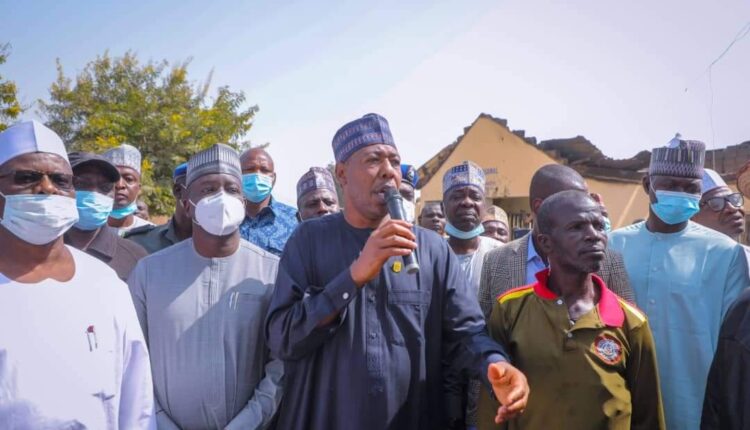 The Borno State Governor, Babagana Zulum, has ordered the reconstruction of public property, including police station, market stalls among others destroyed during yesterday attack by Boko Haram insurgents in Hawul Local Government Area in southern part of the state.

Aside from the reconstruction, the governor also ordered the provision of six patrol, surveillance vehicles and other components to hunters and vigilantes to strengthen local security network in the communities attacked by the insurgents.

Zulum, who traveled from Maiduguri to Katsina and Abuja on Thursday, for series of scheduled activities, cut short the trip on sunday to return home following the attack on four communities including Tashan Alade, Shafa, Azare, Sabon-Kasuwa and Debro where the insurgents attacked schools, shops and places of worship.

Three persosn were killed in Shafa, among them were two hunters and a civilian during the attack. Also, thousands of bags of farm products recently harvested by farmers were looted by the insurgents who also emptied shops and market stalls.

He added his government would also strengthen all security formations, including hunters and vigilantes for improved security of lives and property across all communities in the area.

“We departed Abuja to Maiduguri this morning, and we are here to show our sympathy and to stand with all of you, our brothers and in Hauwl, over the sad incident, yesterday. I have been fully briefed and I have seen things myself, insha’Allah, we will strengthen security here and in all places. We will as soon as possible, make available all your requirements based on my interaction with security stakeholders and community leaders. We will rehabilitate the Police station, the shops and all other infrastructures destroyed yesterday” Zulum said.

Continuing, he said “as enshrined in section 14, 2b of the 1999 constitution, security of lives and property remain the cardinal objective of any government, we know this and we are doing everything within our powers to provide security and ensure the welfare of citizens. We will neither relent nor shy away from our responsibilities, we shall remain resilient and focused in our search for peace in Borno” Zulum said.

Furthermore, he said his visit was to strengthen community resilience and provide support to local volunteers supporting the security agencies in restoring peace.