Nigeria: Citizen’s quest, the emergence and the polity 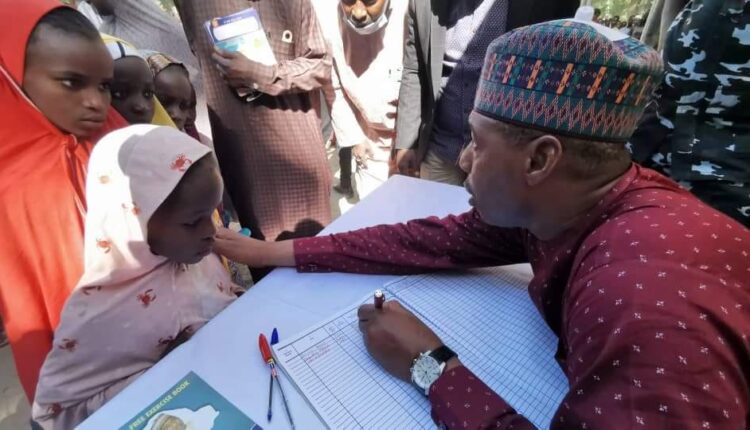 The Borno State Governor, Babagana Zulum, has facilitated the enrollment of no fewer than 1,163 children of Internally Displaced Persons (IDPs) into primary schools in the state.

He explained that the need to begin rebuilding the state through quality education across all levels necessitated the enrolment of the IDPs children who had been missing out on learning activities.

Zulum hinted that the enrolled pupils who hailed from Guzamala and Abadam Local Government Areas in northern Borno had been out of school since their parents and guardians got displaced from their communities by Boko Haram terrorists.

Speaking on Monday while supervising the enrollment in Damasak, on the shores of Lake Chad, the governor enjoined parents and guardians to not hindered their children and wards from enrollment due to terrorist activities in the region.

He assured that where functional schools are provided by the government, social welfare assistance would be restricted to parents who allow their children and wards to attend schools whether western or combined curriculum of Islamic and western education.

The governor also addressed secondary school students in Damasak and those who have written their senior schools’ certificate exams, in preparation for the higher institutions. He promised the students his administration’s support toward actualizing their dreams.

Zulum had traveled to Damasak Saturday morning, the day he launched the distribution of water pumps, fertilizer, seeds, chemicals, and five thousand naira cash to each of 1,200 irrigation farmers embarking on food cultivation during dry season.

Also yesterday, he governor supervised the distribution of food combinations to 10,000 internally displaced families in need of support. Each of the 10,000 families received 25kg of rice, 25kg of beans, 25kg of maize, and 5 liters of cooking oil as part of interventions before they can generate livelihoods for themselves in Damasak.

Damasak, headquarters of the Mobbar Local Government Area in northern Borno, was a former stronghold of Boko Haram insurgents before it was liberated with citizens now resettled by Zulum.

The governor traveled with Senator Abubakar Kyari, the senator representing northern Borno, who is also an indigene of Damasak. Also on his entourage was the state’s Caretaker Chairman of All Progressive Congress, Ali Bukar Dalori, Commissioner for Agriculture, Engr Bukar Talba, and some stakeholders with affiliation to Mobbar LGA.