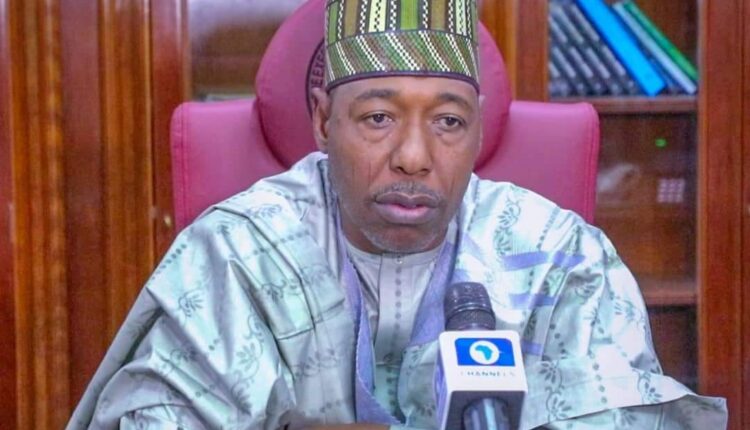 He indicated that the outgone service chiefs gave their all in ensuring the nation’s territorial integrity was protected from internal and external aggression, particularly the northeast region and other trouble zones across the country.

Zulum said that the service chiefs were instrumental in restoring normalcy in Northeastern states, particularly Borno, including resettlement of Internally Displaced Persons (IDPs) and refugees in neighboring countries.

Briefing journalist yesterday in Maiduguri, the governor expressed gratitude to outgone service chiefs, particularly Buratai and Sadique, whom he said, his government worked closely in the fight against Boko Haram.

According to him, the outgoing service chiefs have been with us in the last six years, and during these eventful and challenging years, they immensely contributed to ongoing peace-building efforts through the fight against Boko Haram, and they helped greatly in other developmental efforts.

“Our rebuilding and resettlement efforts are only possible because of the combined efforts of Lieutenant General Buratai as chief of army staff, Air Marshall Sadique as chief of air staff, of course with so much contribution from other service chiefs, intelligence bodies, police, paramilitary and volunteers.

“We can’t ignore these huge contributions, but then, as we all know, everything has an appointed time, we thank all the outgoing service chiefs for their contributions and we wish them the best in future endeavors. As for the incoming, especially, Gen. Leo Irabor who is chief of defence staff, and General Attahiru, the COAS, both of them have worked here in Borno as theatre commanders of operation Lafiya Dole, they know all the issues and I am sure they will hit the ground running.

“The Borno State Government will accord them the same maximum support we gave their predecessors, and we will continue to play our own roles in supporting the military with logistics as we have been regularly doing, we will sustain our mobilization of communities for intelligence gathering, funding operations of thousands of volunteers, praying for our troops and volunteers in front lines and supporting their families as we have been doing,” Zulum said.