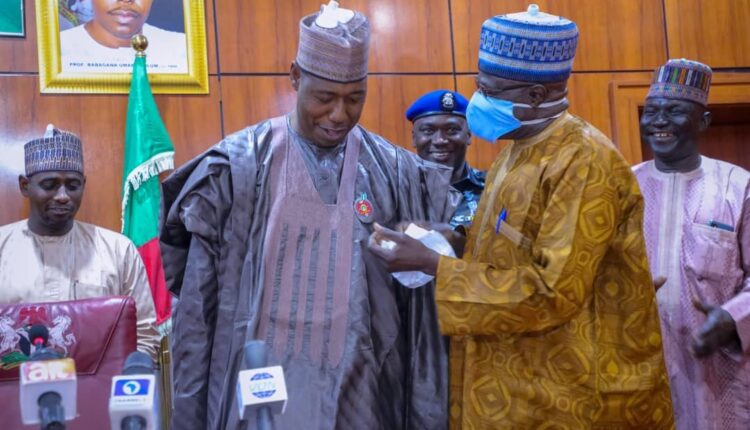 The Borno State Governor, Babagana Zulum, has approved the immediate release of N10 million to retired members of the Nigerian Armed Forces and families of fallen heroes.

Aside from the approved amount, the governor also directed the Ministry of Agriculture to liaise with its officials to identify specific areas the government can support the ex-servicemen’s desire to reactive a farmland allocated to them in the 1940s.

Zulum noted that the gesture had been considered as part of his administration’s commitment to the welfare of those who paid the supreme price while defending the country and its citizens from internal and external aggression.

The governor gave the approval and directive on Monday in Maiduguri shortly after he was decorated with the ceremonial Armed Forces Remembrance Emblem at the Council Chambers of the Government House in Maiduguri.

The chairman of the Nigerian Legion in Borno State, retired Col. William Mamza, decorated the governor as he led officials and heads of the military, the police, the DSS, and para-military agencies to traditionally launch the annual emblem with goes with mobilization of support for ex-servicemen and families of fallen heroes.

Granting a request by the legion, Zulum, a professor of Irrigation Agriculture, promised to go far beyond their demands, especially since it was on agriculture; an area he is obviously passionate about.

The governor charged officials of the legion to remain committed to agricultural activities after getting support from the government.

Zulum also appealed to the officials to use the funds generated through the ceremonial emblem launch in such a way that the neediest families, particularly of fallen heroes, are supported through various means.

Under Tuesday’s additional measures, retail, hospitality and leisure companies will be able to claim one-off grants worth up to 9,000 pounds to get them through the coming months, costing up to 4 billion pounds in total, along with 600 million pounds of grants for other businesses.

“This will help businesses to get through the months ahead – and crucially it will help sustain jobs, so workers can be ready to return when they are able to reopen,” Sunak said.

Government forecasters in November predicted almost 400 billion pounds of borrowing this financial year, equivalent to 19% of GDP – a peacetime record but one that, at least for now, can be financed at record-low interest rates.