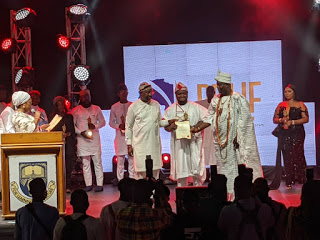 Also recognised posthumously with an award was the first female combat helicopter pilot, late Tolulope Arotile, who died last year, for her contribution to Nigeria’s unity, particularly preventing insurgents from extending their operations across the country.

At the award ceremony held recently which was also attended by the Minister of Youth and Sports, Sunday Dare, the founder of the Royal African Young Leadership Forum (RAYLF), Ooni of Ife, Oba Adeyeye Ogunwusi, said that the ceremony was designed to celebrate outstanding intervention and achievements recorded by the youth across different sectors, just as they contribute their quota towards the development of Nigeria and African continent.

The monarch, while charging the awardees to be worthy ambassadors, said “Africa can overcome all its woes and become the wonders of the world by harnessing the uniqueness of our young populations, determined to defeat the monsters of poverty and unemployment”.

Discussing his commitment to see African youths succeed, Ogunwusi explained that within the global purview of his Royal mission and through RAYLF, “I’m unapologetically committed to stir up in our young populations the values and ideals of patriotism that our forebearers passed down to us”

Among the awardees, Olagunju was recognized for the outstanding contribution as a development journalist and a leading change agent combating fake news and misinformation with several of his outstanding fact-check research.

Olagunju is a media and communication enthusiast with over eight years of experience. His media career spans development communication, fact-checking, political communications, and the art of storytelling for social good.

As a development journalist, Olagunju was a strong advocate for maternal health, where he made tangible, continental contributions to the African Union Campaign on Accelerated Reduction in Maternal Mortality in Africa (CARMMA)

It would be recalled that his advocacy works featured on several national newspapers in Nigeria and global media platforms including the several foreign media. And between 2015 and 2019, he served as a digital media expert to the former governor of Lagos State, Akinwunmi Ambode, providing professional media and communication support to the Lagos State government, essentially by bridging the communication gap between the government and the residents of the State.

The maiden edition was held in 2020 and the second edition took place on 29 May, 2021, at the Oduduwa Hall of Obafemi Awolowo University Ile-Ife. According to monarch, Africa needs its finest and ever dedicated young demography that is rich in creative culture, governance and leadership, innovation and technology, entrepreneurship and academic excellence.”