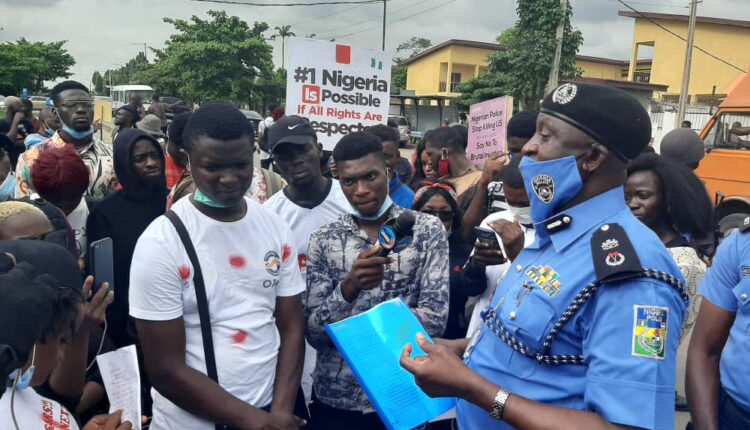 Youths in their hundreds have stormed the streets of Lagos to protest excesses of Special Anti-Robbery Squad (SARS) of the Nigeria Police Force, said to include alleged brutality, extortions, and extra-judicial killings of innocent Nigerians.

The protest, the youths claimed, was to register their grievances and cement social media outrage that had been trailing excesses of the SARS personnel which ad claimed lives and properties of Nigerians.

The protesters, armed with placards, stormed the Police Command Headquarters, Ikeja on Wednesday, with inscriptions including “Am I the next to die?”, “Stop police brutality”, “#1 Nigeria is possible if all rights are respected”   “Nigeria police stop killing us”  “#EndSARS”; “Our lives matter”, “Stop criminalising innocent citizens” and “stop extorting and killing us”, among others.

Others include a list showing officers that have been found culpable of extra-judicial activities, public inquiry on the activities of the unit in the past one year, and compensation to be given to verifiable victims both dead and alive.

Also, tags on all policemen must carry names and job details of officers, outlaw gun-trotting police officers in civil wear and unidentifiable cars or buses, and create digital mediums for tracking cases with the police.

Addressing the protesters on Wednesday, the state’s Commissioner of Police, Hakeem Odumosu, said that the alleged brutality, extortion, among others on SARS part was being handled and that the police hierarchy would end the menace in line with the IGP’s directives and efforts of Federal government to sanitize the police institution in Nigeria.

According to him,  the command would henceforth arrest and prosecute any erring police officer who violates the order of the IGP and Lagos state common.