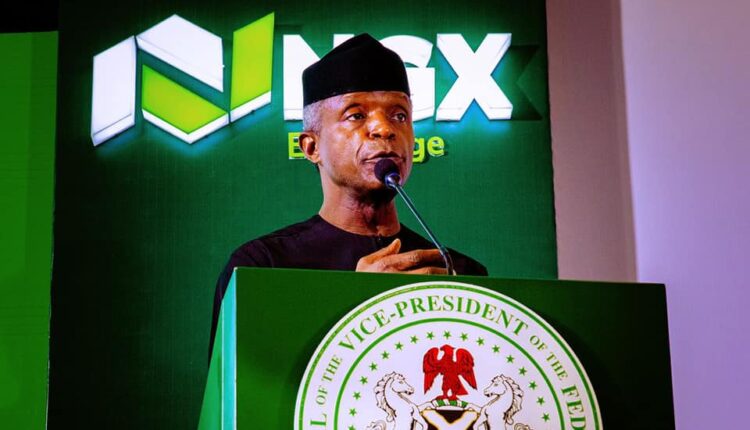 Vice President Yemi Osinbajo has disclosed that with more room to redefine the exchange for international competitiveness and the largest concentration of young people in the primary market, Nigeria is in a better position to advance its capital markets locally and globally.

While emphasizing the digital transformation of the markets, Osinbajo also highlighted many opportunities it would provide for the capital markets, which includes bringing in more young investors to place the industry on global competitive level.

He argued that the the adoption of technology would bring in a new crop of young investors, many of whom he said, use their smartphones primarily for engaging with commerce and banking activities.

Speaking at the first Capital Market Conference of the Nigerian Exchange (NGX) Group with the theme: “The Future Ready Capital Market: Innovating for Nigeria’s Sustainable Recovery”, the vice president noted that every smart investor must be looking at how to be a part of the miracle of the Nigerian Unicorns, which he claimed were the five or six indigenous Nigerian companies (driven by young Nigerians) that became billion-dollar enterprises since 2015 in the midst of two recessions.

According to him, today, the huge retail outlets already created by the telcos with well over a hundred million subscribers, the wide reach of banks, especially with the numerous financial inclusion initiatives, make this probably the most auspicious moment for digitizing the capital market to bring in the millions of new young retail investors.

The vice president also noted the efforts of the NGX Technology Board to attract tech companies he referred to as ‘the present and future tech unicorns’ to the market as a viable option for raising capital. Osinbajo stated that technology would also give “more investors the opportunity to benefit from the phenomenal growth of these companies.”

However, he observed that “we must work gingerly to ensure that where policy may be involved, we enhance and not encumber the ability of these companies to raise capital quickly and efficiently. This, of course, will call for mirroring successful global best practices.”

Osinbajo, who noted that this was probably the most exciting time in the history of capital markets in Nigeria, added that the African Continental Free Trade Agreement (AfCFTA) also offered exciting new prospects for cross-border listings, activity, and the formation of long-term capital.

“Your brand campaign, ‘the Stock of which Africa is made of’ which was well commended by Mr. President is not only imaginative but bold and focused. I think of importance now is that the NGX must work with government AfCFTA negotiators, especially as the process progresses to setting the rules in the service sector,” he submitted.

Urging the NGX to see itself as a critical player in the AfCFTA negotiations, he added that “we are at a point where we are looking at negotiating Service Rules, we have looked at Rules of Origin already, so this is the time to come into play to get the best deals possible from all our partners all across Africa.”

He further stated that with the successful completion of its demutualization process, “which fully commercializes the functions of the exchange as a corporate entity and importantly, separates the regulatory function to prevent conflicts of interest, the NGX can now focus on its core function of exploring new opportunities, leveraging strategic partnerships and transacting business to deliver profit.”

According to the VP, while its primary market not only has the largest concentration of young people, the NGX is “now positioned to reverse the trend of declining IPOs in capital markets worldwide, with offerings that are more business-oriented and less constrained exchange such as you have now.

“We also now have a greater room for redefining the exchange for international competitiveness. This is especially so as is currently being done, reviewing the governance framework and, of course, the profit orientation of the exchange means that investors can look forward to seeing more fast-growing companies listed on the exchange.”

On how the Federal Government is supporting the capital markets to become globally competitive, the vice president stated government’s efforts in the AfCFTA negotiations, as well as policies to improve the economic environment, including the recent passage of the Petroleum Industry Act 2021, and incorporation of the Nigeria National Petroleum Corporation (NNPC).

He added that “next year, the Federal Government will further strengthen the frameworks for concessions and public-private partnerships (PPPs) especially as they relate to infrastructure.”