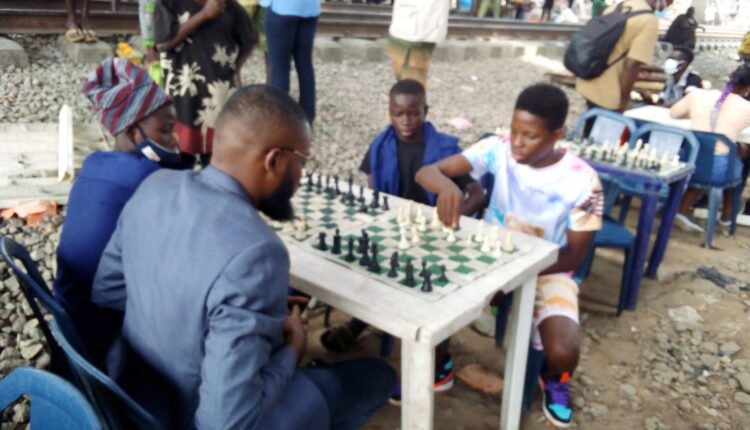 Fate they say takes only a matter of time before it shines brightly to birth a star. Indeed, a star was born in Fawaz Adeoye, which many did not know. This is his journey from grass to grace, a story of an opportunity well leveraged upon by a teenager that was once not considered as a potential ambassador for Nigeria.

Chess in slums Africa, a non-profit organization, known for using the board game as a framework to promote education and raise champions from communities occupied by the low-income earners recently organised a chess training for “51 homeless children” living under the bridge in Oshodi, a hustling and bustling area rated as the center of Lagos State.

On his personal social media handle, Tunde Onakayo, founder of the organisation, had announced that Fawaz, a teenager that uses Oshodi underbridge as shelter, emerged the overall champion in both chess and mental mathematics.

“Adeoye Fawaz, an 18-year-old boy who works as a bus conductor and has lived years of his life under Oshodi bridge emerged as our overall champion in both chess and mental maths. A star is born,” he wrote.

In this one-on-one interview with Esther Kalu, a Correspondent with The Guild, Fawaz narrates his journey to stardom, as the overall winner of the chess tournament organized by the initiative, sharing his dreams, and expectations from the government as well as corporate individuals. 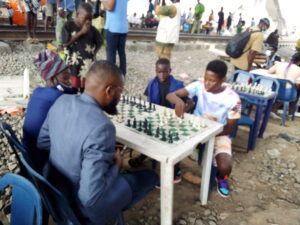 CAN YOU BRIEFLY INTRODUCE YOURSELF?
My name is Fawaz Adeoye. I am from Oyo State. I left Ibadan for Lagos because of the quest for freedom. I lost my mother in 2018. My father left my mother when I was just three years old. At the age of 16 years, I always go to see my father once in a while after I left Ibadan, I have not seen him again. I am really happy that I came in contact with Mr. Tunde and his team who taught me how to play Chess because I will never have believed that what they were teaching us will help me today.

HOW HAS GROWING UP BEEN FOR YOU?
Growing up wasn’t so good because I had struggled to survive coupled with family issues that hindered me from a lot of things including my education. My parents separated when I was still a child and I left home for freedom in order to make ends meet. That was how I came to Oshodi in Lagos.

HOW WERE YOU ABLE TO MANAGE YOUR TIME AS A BUS CONDUCTOR AND PARTICIPATING IN THE CHESS COMPETITION?

Yes! I work as a conductor when the organizers came to hold the tournament in Oshodi. I indicated interest to play the chess game when they started. I didn’t work throughout the tournament I had to stop to focus on the competition. That’s why I was able to learn it and play well.

DID YOU GO TO SCHOOL BEFORE NOW AND IS IT IN YOUR PLANS TO FURTHER YOUR EDUCATION?

I used to go to school and I stopped in Junior secondary school, JSS 2 to be precise. I had to stop going to school after I lost my mother. Education is something I’ve always wanted. I want to complete my education and achieve my dreams. It is my desire to further my education. If I see anyone who can help me achieve that dream of completing my education, I will be grateful to him.

WHAT IS YOUR AMBITION?
I have come to love the game of chess and I want to become a chess master to play to exhibit my skills in the game. I still have the dream of becoming a musician and comedian.

WITH YOUR NEW STATUS, WHAT DO YOU WANT FROM THE GOVERNMENT?
What I want from the government is for them to change their perception about all these touts in the streets. They should stop seeing them as non-entities who cannot make it in life. They should stop using task force to harass or arrest them rather they should find a way to help them become the best of themselves because there is nobody without a talent including the touts too. Personally, I will want the government to help me achieve my dreams of going to school and support me in any way that they can.