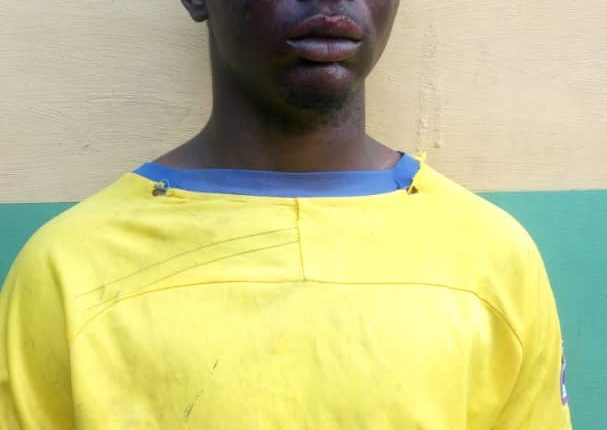 The deceased, identified as Mariam Alabi, was confirmed dead on Sunday after efforts to save her life proved abortive due to the degree of burns suffered from the act allegedly perpetrated by her 19-year-old lover, Victor Orji.

It was gathered that Mariam was set ablaze yesterday by Victor, who confirmed to engage in internet fraud popularly called yahoo boys, over alleged infidelity.

The guild learned that the deceased and Victor had been living together for over eight months after they met on 28th of February through a hookup links, decided to cohabit a month after; renting an apartment at G54 Army Post Service Housing Estate, Ojo, Lagos.

Our correspondent gathered that the suspect allegedly brought the victim into his house with conditions that she would quit prostitution and stick to him alone.

Sources said that trouble started last Thursday when the deceased left home to fix her hair and did not return until the next day (Friday) and equally left the house again Friday under the pretense that she was visiting her Father.

They added that Victor got wind of the hoax after she allegedly went to see another man that had sought for her service.

According to them, Victor’s suspicion was further confirmed on Saturday after the deceased returned from her trip and he scrolled through her phone, discovering her chats, video calls and nude pictures sent to the client she spent the night with.

“And Victor became angry and used the petrol he kept for his generator to set her ablaze. It was after this that the neighbours alerted the team of detectives that visited the scene of the incident.

Confirming the incident, Police Public Relation Officer (PPRO), Bala Elkana, disclosed that after his arrest by operatives of Iba Police Station, the suspect confessed that he used petrol to set the victim ablaze.

Bala said that during interrogation of the suspect whose parents live apart, he revealed that he finished his Secondary School in 2016 at Gbagada Senior Grammar School, Lagos and is seeking admission into tertiary institution.

“And that he has been into internet fraud popularly known as Yahoo boys for the past three years. Also, the N600,000 he used in renting the apartment they live in, is a proceed of Internet fraud.

“After the incident, the victim was taken to General Hospital, Igando where she was admitted but died in the early hours on Sunday.

“The Commissioner of Police Lagos State, Hakeem Odumosu, has directed the immediate transfer of the case to Criminal Investigation Department Yaba. The suspect will be charged to Court for murder”.