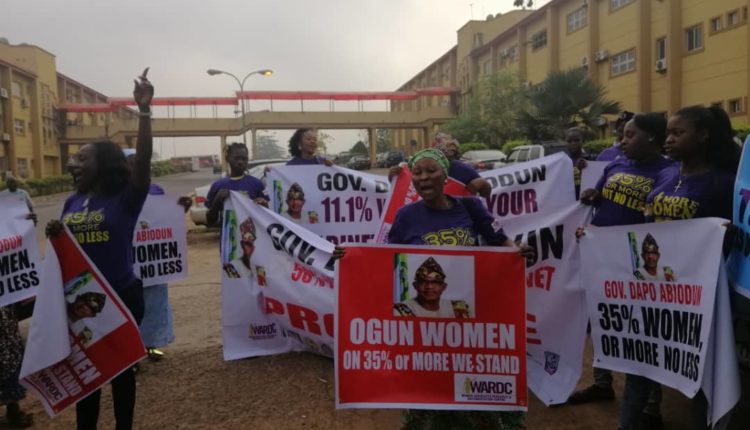 An advocacy group, Coalition of More Women in Governance, on Monday halted activities at the Ogun State House of Assembly, protesting the inclusion of more women in the state governor’s cabinet list forwarded to the Assembly.

The protest came barely four days after the State Governor, Dapo Abiodun, forwarded 18 names of commissioner-nominees which had only two women to the House for confirmation.

Speaking on behalf of the group, Dr. Abiola Akinyode,  said that women in the state were disappointed with the number of women who made the commissioner-nominee list submitted to the House by the governor.

Akinyode , who spoke at the assembly’s complex in Abeokuta, stated that the group would not accept the list,  saying that there should be at least 35 percent of women in the list.

She explained that the assembly had passed a resolution sometimes in October calling on the state government to give women 35 percent affirmative in governance.

“On 35 per cent or more we stand. That is why we are here. Governance must have peoples face and it must be inclusive. Sustainable Development Goals (SDG) talks about gender equality and we want the governor to do the needful. You are not elected to be a rubber stamp but to represent the people well”, she said.

Responding, the Speaker, Olakunle Oluomo, noted that the House actually passed a resolution on 35 percent affirmative for women in governance.

Oluomo, who was represented by Oludaisi Elemide, Chairman, House Committee on Transportation, stressed that the resolution was an advice to the Executive and not a law, saying that the message of the group would be conveyed to the governor as soon as possible.

“I want to tell you that not only commissioners make the cabinet, we have Advisers and we also have Consultants and we have more women in this regard,” he said.

The speaker advised the protesters to also take the protest to the governor’s office,  saying that the assembly would also do the needful as regards their demands.