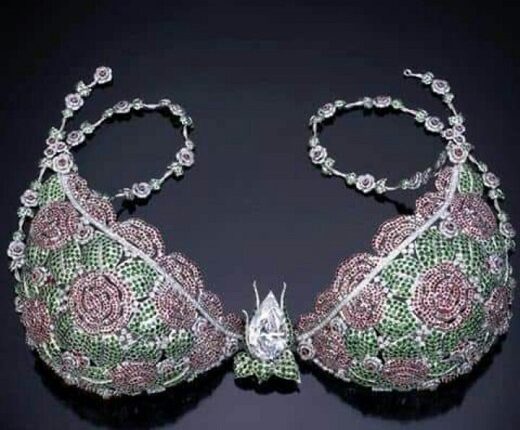 It felt loathsome and suspicious ab initio seeing a lady’s underwear displayed for auction. A pretty minister’s bras for gbanjo! EFCC’s sense of decency needs interrogation, one had thought. What is the cost of a bra, ordinary bra? The Commission must relish obscenity. Abandoning the minister’s dubious exotic cars and penthouses in Banana Island for her bras was a lee trip to lewdness. An amatory idea is conceivable only by the sons of Lucifer!

When you exhibit a woman’s underwear, you undress her publicly. You create images in minds. Bad men hold the bras and die. They feel they are cuddling the woman’s breasts! Diezani’s bras in public make a good sight. A lifetime opportunity to see the unseen! A touch of forever! Some would touch and refuse to wash their hands. Hands that held pretty Diezani’s underwear!

A connection exists between a dress and its owner. The dress equates to the skin. Touch someone’s underwear and you have touched the part of the body it covers! Madmen and specialists! People who purchase big sportsmen’s wears with huge sums have a philosophy behind the purchase. See Diezani’s corsets, therefore, and philosophize!

Then, EFCC snapped with their findings. And the romantic feelings stopped. A derisory no-story issue turned big. Journalists who had lampooned the bra news ate their words. They didn’t notice that they had lost their noses for news. EFCC got it right and became the bigger journalist. An ordinary bra made headlines. ‘Diezani’s bras on display for sale’ turned big! The bras are big in cost. The news value of a story is in its cost.

The uncommon woman minister had thirty world’s most expensive bras, some are worth $12. 5 million! Ordinary kostay! Convert that to naira and own a state in Nigeria! Someone described some of the bras as heavenly star bras of sapphires with 90 carat emerald-cut diamond, worth $10.6 million. The bras must be out of this world – possibly part of the accursed Israelites’ molten calf created when Moses went for the Ten Commandments on Mount Sinai. How does one wear such corruption and live?

The earlier touch of romance by many changed to a leprous touch. Gold cast in corruption smells faeces. Those who initially savoured the aroma of the bras fled. They didn’t see the gold anymore. They saw leprosy. They saw viral bras. Rotten bras! It is a shame. The shame of womanhood! Natural breasts of succour enclosed with blood-stained bras! No milk of kindness flows from such. Bras that could deliver her Niger Delta region from poverty; that could have saved the blood of her people killed during protests over agitations for the Federal Government’s care. One bra could deliver hundreds of derelicts and change their lives. Diezani converted the riches of her region to bras.

Gold is gold only when it is pure. Abacha and Diezani have a common gene. They are blood relations. Abacha’s love was for the American dollar; Diezani’s is for the damned property. They are equally yoked and possessed. If Abacha were alive, we might never have known. And if Diezani had stayed here, nobody might have seen those bras. There are bigger bras of others within, bras choking this country’s economy! Who will locate them?