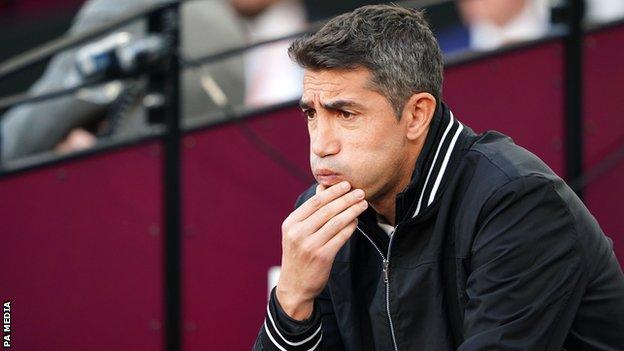 The management of English football club, Wolves, has sacked the team’s manager, Bruno Lage, after the team slipped into relegation zone on the premier league table.

Lage’s appointment was terminated by the management after the team was beaten 2-0 by West Ham during their eight-game of the 2022/2023 season.

The chairman, Wolves, Jeff Shi, who announced the sack on Sunday, said that poor form meant he had no choice but to take the difficult decision to sack Lage.

According to him, Bruno is an excellent coach, a hardworking and dedicated manager, and a warm, wise and honest man.

“He and his staff have been a pleasure to work with throughout their time at Wolves, so it is with much sadness that we have had to make what has been a difficult decision.

“I honestly have no doubts about Bruno’s ability and I’m sure he will succeed elsewhere, however, the team’s form and performances over the last few months mean that we have no choice but to act.”

Before his sack, Lage succeeded Nuno Espirito Santo last summer and led Wolves to a 10th-placed finish in his first season in charge.

However, the team has only succeeded in winning one and lost nine of their past 15 Premier League matches under the Portuguese tactician.

At the start of the season, Wolves spent £100m on new signings this summer as Lage looked to mould a team in his image, but the Portuguese has been unable to transform his side’s fortunes and his 15-month tenure is now over.

Since a 2-1 win over Aston Villa at Molineux on April 2, Wolves have won just one of their previous 15 games in the Premier League.

Speaking after Wolves’ most recent loss yesterday – a game that would prove to be Lage’s final one in charge – he said: “We’re under pressure.

Although there were boos and chants towards the end of the 2-0 defeat to West Ham, the majority of Wolves supporters retained some hope that the results would turn. Many believed that the talent within the team would win out.

Lage’s name was chanted loudly and often in his final two home games and cannot point to a lack of support.