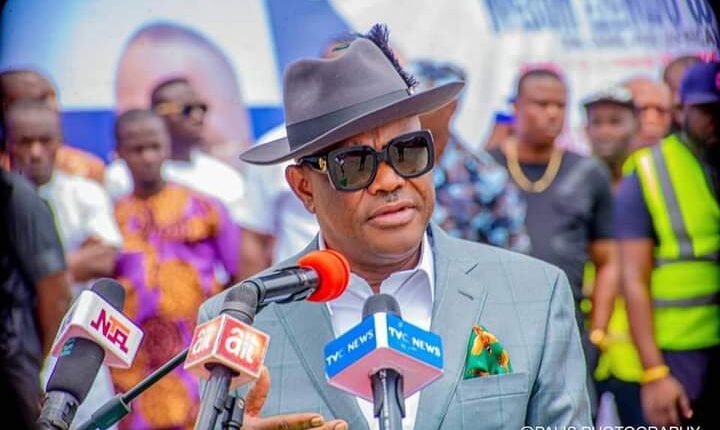 The Rivers State Governor, Nyesom Wike, has said that hotels and facilities discovered to be serving as hideouts for cultists and other criminals across the state would be pulled down, in order to sustain and improve the security of lives and property.

Wike said that the state government has spent heavily on the security architecture and that anyone would not be allowed to disrupt the peace and harmony that had existed across the state.

He added that both cultists and the facility owner would be arrested and made to face the wrath of the law, to serve as a deterrent to others planning to aid criminals in the state.

The governor gave the warning on Thursday at the flag-off of Flyover 12, Location Junction, Port Harcourt, the state capital, on Friday, by a former minister of Information and National Orientation, Prof. Jerry Gana.

On the project embarked upon by the administration, Wike said his administration is building flyovers to decongest the traffic situation in Port Harcourt.

He said: “My dear brothers and sisters, today marks the 12th flyover we are constructing since 2019. We have completed and commissioned seven flyovers, by the Grace of God, in September we will commission the 8th and 9th flyovers, and by December, the 10th one will be commissioned.

“Anybody who has been using the route will know that the gridlock has been horrible. We decided to see how we can decongest the traffic situation that has affected economic activities negatively in this area.

“The people should be patient and endure the inconvenience. Please bear with us, this should be your own sacrifice to bring the needed development because no development comes with sacrifice.

“I urge Julius Berger to reduce the completion time from 10 months to 7 months at most since the money for the project is already there. I know they have the capacity to deliver the job even before the specified time,” the Governor added.

Gana, meanwhile, described Wike as a performer who has continued to puts his words into action and urged the residents to continuously support the administration to succeed.

“This is the essence of democracy, the people elect a good leader, and the leader goes on to implement good projects and policies for the people. Therefore there is a partnership between leadership and good governance, we are seeing this demonstration in action in Rivers State under Governor Wike. We are proud of you because you are a great performer who does what he says he will do.

While giving the project description, the Honourable Commissioner for Works, Dr. George-Kelly D. Alabo, said the 12th flyover is going to be just 80m shorter than the 11th flyover that was flagged off on yesterday, Thursday 18 August 2022.

“The 12th flyover will be 927.5m long, just 80m shorter than flyover 11 that was flagged off yesterday. It is going to have 17.6m width because it will have 2 lanes. 1m width median and 1m walkways on both sides.

“This flyover is going to have 104 beams, each of these beams will be 22.5m long which equates the length of each pile. The beams will be sitting on 208 elastomeric bearings to accommodate vertical compression,” he stated.