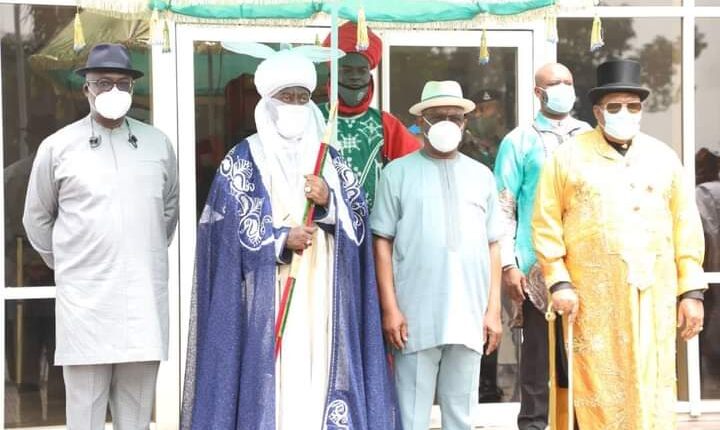 The Rivers State Governor, Nyesom Wike, has threatened to sue the Federal Government over plans to withdraw more funds from the Excess Crude Account to purchase additional hardware for security forces to combat kidnapping, banditry and other forms of criminality across the country.

Wike added that the River state government will contest the move including plans by state governors to cede portions of their share from the joint account and other funds to support the apex government in its move to stem tide of insecurity in Nigeria, in court.

The governor wondered what happened to the $1 billion withdrawn from Excess Crude Account in 2017 by the President Muhammadu Buhari led administration on the stance that it would be used to fund the fight against insurgents in the North-East.

His threat came barely 24 hours after chairman of state Governors under the aegis of Nigerian Governors Forum (NGF), Kayode Fayemi, announced that the governors have thrown their weight behind the apex government move to procure more weapons for the military to restore peace and harmony in the country.

He stated these when he played host to the Emir of Kano, Aminu Ado Bayero, who was on a courtesy visit to him at Government House, Port Harcourt on Friday, adding that the state would not support the plan for a fresh withdrawal except except that it is given 13 percent share from the account.

“Yesterday, I was told that the governors agreed that they will take money from Excess Crude to support military. What of the one they took before, the $1billion that they gave to the military?

“Now again! This one, I will tell my Attorney-General; you will have to prepare, we will go to court. I will not support that one except they will give us our 13 percent first from that Excess Crude Account”.

The Emir explained that his visit to Rivers State, the heart of the Niger Delta, is part of his fraternal tour to national leaders and traditional institution across the country.

The Emir urged Governor Wike and other regional leaders to continue to ensure that the region remains a welcoming environment for all Nigerians to thrive.

“We have therefore made it a point every time we meet with traditional or political leaders across the country to ask them to do all within their powers to make the challenges of today’s life a bit more bearable for the common man”.