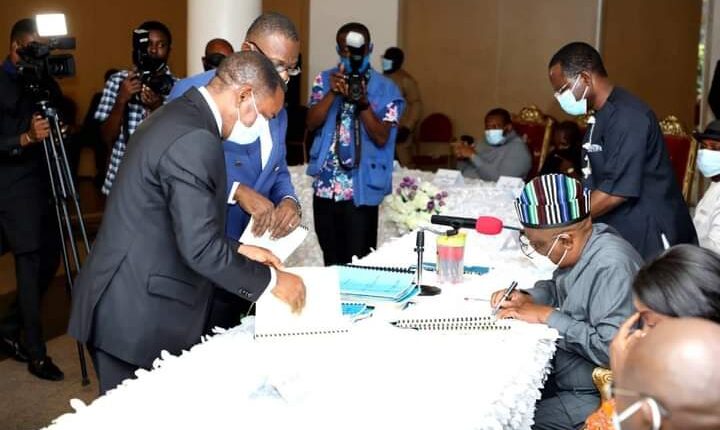 Rivers State Governor, Nyesom Wike, has signed into law the 2021 Appropriation Bill with a promise to implement it in providing basic infrastructure for the betterment of citizens across the state.

He explained that provision of quality infrastructures across the state had been prioritise by his administration in line with the government’s commitment to sustain the tempo of development that has continued to stand the state out in the federation.

Signing the 2021 Budget at the Banquet Hall of Government House, Port Harcourt yesterday, the governor said that his administration would stop at nothing in delivering top-notch projects in all nooks and crannies of the state.

He assured those who have wondered why the on-going projects in their local government areas were not mentioned when he presented the budget to the State Assembly that such projects are already captured as special projects and would be completed.

“So many people have asked why there are no projects in their area. We could not have, in our budget speech, named all the projects. But within the budget, there are many projects and those that cannot be named, we have to put them under special projects.

“Everybody should rest assured that no local government will be left out as long as the implementation of this budget is concerned. What is important is that we will do all we can to make sure that this Appropriation Law is fully implemented, particularly as regards basic infrastructure that we are supposed to provide for our people,” Wike said.

The governor maintained that the infrastructural revolution in the state was already appreciated across party divide particularly with comments from the chairman of Senate Committee On Work, Senator Adamu Aliero.

“Today, when we went for the 26th meeting of National Council on Works. Senator Adamu Aliero said he wants to tell other states to emulate what’s going on in Rivers state.

“He said that as they were coming, they were so satisfied with what they have seen and Babatunde Fashola, who is the Minister of Works and Housing, said he does not want to talk about the development in the state so that I will not play politics with it. People are seeing the good works we are doing.”

The governor commended members of the State Assembly for the expeditious passage of the bill into law, which he said, indicated their love for the continued development of the state.

“It is not easy to pass these bills into laws in such a short time and I want to commend your efforts. If you’re not interested in the development of the state it will not have been possible.

“We have always said that it is not only for the Executive to see that the state moves forward, it is also for the Legislature and Judiciary. We are lucky that in our state that the arms of government are working very closely, and doing their own work.

“People should talk about how Rivers State will move forward. I’ve told anybody to challenge us, and tell me one local government where there is no state government project. Let us work together and you’ll see our state will be a different state.”

In presenting the bill for signing, the leader of the House, Hon. Martins Amaewhule said that the Assembly gave speedy attention to the bills because they would further make life better for Rivers people when implemented.

Speaker of the house, Ikuinyi-Owaji Ibani, assured that the Assembly would continue to perform its function to complement efforts of the Executive in providing secure state for the people.