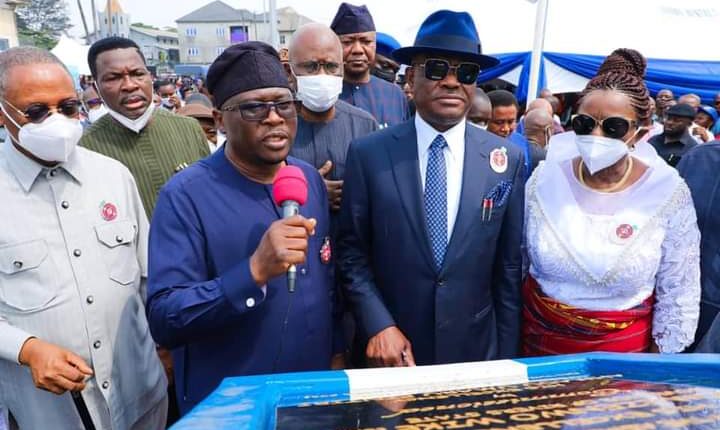 Ahead of the 2023 gubernatorial poll in Rivers, the State Governor, Nyesom Wike, and leaders of the Peoples Democratic Party (PDP) have commenced the search for the next governor of the state.

The search, according to Wike, has commenced with consultation among the regions and elders of the ruling party in the state and traditional institutions to ascertain the best possible candidate for the seat.

Ongoing search for the next Rivers Governor was disclosed by the Wike at commissioning of the Ezimgbu Road that was performed by the Adamawa State Governor, Umaru Fintiri, yesterday in Port Harcourt.

The governor noted that he has told some leaders of Rivers State, who paid him a birthday visit, that the process of consultation for the next governor of the State has begun.

He reiterated that no candidate would be imposed on the party or Rivers people. He has also urged any member of cabinet nursing governorship ambition to be at liberty to resign.

“This morning, our leaders came to me to wish me happy birthday. I told them to thank you and that I also have a birthday gift for them. I told them, you know I’m leaving, now, we have to start consultation for who takes over.

“And I told them, let nobody go and spend his money because, after the consultation, we will all sit down and say this is the person we think that should continue where we have stopped.

“So, the issue of who is going to take over from me, the process has started and it has stared today being my birthday. But what is important to us, like I have always said, we are not going to impose anybody.”

Wike stated that it is important that the Independent National Electoral Commission (INEC) continues to ensure that elections are free and fair.

According to him, if not for the courage to rig election, why will anybody in Rivers State be gearing up to campaign for election on the platform of another party instead of the PDP. He said whatever their plans are, they will fail.

Performing the inauguration, the Adamawa State Governor, Rt. Hon. Ahmadu Umaru Fintiri noted that he had always known Governor Wike as a man who has instituted a culture of commissioning projects in Rivers State for the use of the people.

According to him, it is from Rivers State, under Governor Wike, that they have all learnt that one can deliver on multiple projects and dedicate a whole month to commissioning them.

“As recent as April this year, so many projects were commissioned in the State and today, instead of receiving birthday gifts from the Rivers people, he has decided to celebrate his birthday in a grand style by giving Rivers people a carnival of commissioning.”

Tasie-Amadi pointed out that not only has the reconstruction of the Ezimgbu Road saved travel time for commuters, it has also afforded property owners enhanced value on their property and accessibility.