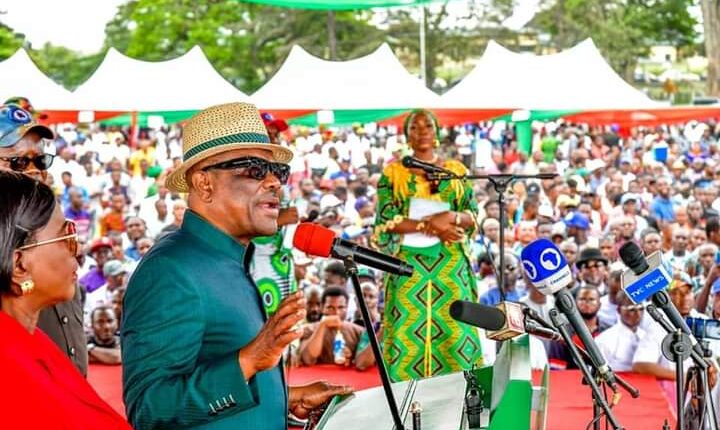 The Rivers State Governor, Nyesom Wike, has said that the Vote of Confidence passed by the National Executive Council (NEC) of the Peoples Democratic Party (PDP) on the national chairman of the party, Iyorchia Ayu, will not douse the ongoing agitation for the resignation of Ayu and allow another member from other region aside from the North occupy the office.

Wike said that just like the Vote of Confidence was unable to save Ayu’s predecessor, Uche Secondus, the current PDP national chairman will also not be protected by the decision reached during the recent NEC meeting held in Abuja.

He stated decision by NEC will not dissuade him and others from insisting that the prevailing structural imbalance within party must be addressed.

The governor noted that all those rejoicing over the development including the immediate past chairman of the party, Secondus, would soon be left agonizing when his faction increase the tempo of their agitation across the country.

He stated these at the 11th Hour homecoming and reception organised for decampees from various political parties who have joined the Peoples Democratic Party (PDP) in Rivers State, which held at the Isaac Boro Park in Port Harcourt on Saturday.

“I was listening, watching, they said there is one man they call Secondus. They said he was dancing, celebrating that NEC gave their person a vote of confidence.

“He (Secondus) forgets history that the same NEC through Aliyu Babangida who moved a motion for a vote of confidence supported by the same person – Ndudi Elumelu. They gave him a vote of confidence, what happened? He left office,” Wike said in Port Harcourt on Saturday when he received hundreds of defectors from the All Progressives Congress (APC) to the PDP in the oil-rich state.

Wike and Secondus were said to be kinsmen but a feud had thwarted their relationship last year and the Rivers governor had demanded his resignation as PDP chairman. Secondus’ tenure was later truncated last August when a court sacked him.

The governor challenged Secondus to come back to Rivers to mobilise support for the PDP ahead of the 2023 elections and insisted that Ayu must exit the chairmanship of the party for a southerner.

The governor said, “We don’t fight and go back. If you like, you can have as many votes of confidence, it is not my business; my business is to make sure the right thing is done and the right thing must be done whether today or tomorrow.

“So, let nobody worry himself. If you are dancing, come home and dance, come and mobilise for the party you think that will election. I am here waiting for him. No more 419 in this game. Enough is enough.

He said despite the heightening political aligning and negotiations that are going on, his administration has not abandoned governance in the State.

The governor explained that it is the love that he has for the State that has made him to remain devoted to providing good governance until the last day of his tenure.

“I’m not going to play party with the interest of my people. Rivers State is paramount to me first before any other person or group.

“So, the eyes can see what we have done. Up till today, we have never abandoned governance. So many people are already rounding up, taking the last they have but yet, we are still committed in commissioning, and flagging off projects.

“Because of the love we have for our people, we will continue to serve you till May 29, when by the grace of God, Siminialaye Fubara will be inaugurated the governor of Rivers State.”

Army kills many bandits behind Defense Academy attack in Kaduna