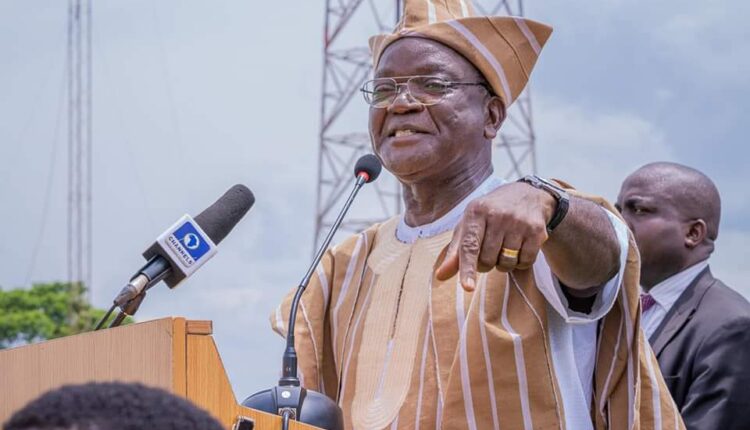 Benue State Governor, Samuel Ortom, has advanced reasons why governors elected under platform of Peoples Democratic Party (APC) are far above their counterparts elected under All Progressives Congress (APC), saying while their APC peers have allegedly lost track, the opposition governors continue to make waves in terms of performance and infrastructural projects despite Nigeria’s economic challenges.

He added that with current Nigerian realities, governors elected on platform of APC have failed leadership test in terms of economic and security challenges bedevilling the country even been stakeholders that are in line with Federal Government by virtue of party affiliation.

Ortom, who stated that the PDP and its elected leaders have been demonstrating good leadership as evident in its governors delivering laudable infrastructure projects, challenged the APC, which he accused of having failed in every area, to step up to the plate.

The governor spoke yesterday when he joined his Oyo State counterpart, Seyi Makinde, to commission the 65 kilometres Moniya-Ojutaye-Ijaiye-Iseyin Road. Ortom expressed his joy at being given the opportunity to associate with Makinde on such a laudable project, hailing the governor for his achievements in the state.

According to him, the PDP is working despite all the economic and security challenges. The PDP has demonstrated leadership and that is why we are commissioning this road today, which is amazing.

“Let me, once again, call on the APC Federal Government to rise up and give leadership because our people are in pain. From North-East, North-West to North-Central to South-South, South-East, and South-West, everyone is faced with security challenges and without security, there can be no meaningful development except in PDP-controlled state.

“In 2015, the mantle of leadership was given to APC. But from all indications, it is clear to every Nigerian that APC does not have the capacity to deliver. Go and check, economically, how much was one dollar when APC came into government in 2015. “What was the nature of our security in this country when APC took over power? What was our social relationship in this country? Politically too, where are we? But let us work hard and by praying. As we pray, whether Muslims or Christians, let us also apply work because faith without work is death. So, let us work very hard so that come 2023, by the grace of God, we shall change the change,” the Benue governor said.

He equally commended Oyo State people for their resolve to continue to back Makinde, saying: “I commend Oyo State people for giving Makinde the backing; for supporting him. As we were coming from the Government House down to this place, the members of the public generally were waiving in applause to our governor. Don’t ever contemplate leaving your people. Work with them, do what they want, share their pains, and also help them to give them leadership that will lead them out of their pains.”

Ortom, who was the special guest of honour at the event, commended Makinde for delivering such a massive road project, among many others, despite economic challenges and other odds that have befallen the nation. He congratulated Makinde for standing firm with his people, saying Governor’s of the Peoples Democratic Party (PDP) are living up to expectations of the people.

The Benue governor equally lauded the people of the state for supporting Makinde, noting that evidence around have shown that while the All Progressives Congress (APC) has failed the leadership test across different spheres of life, PDP governors are doing very well.

On his part, Makinde, while speaking at the official commissioning ceremony held at the Akinyele Local Government Secretariat, Moniya, Ibadan, maintained that the road would enhance socio-economic development of the state and play a major role in engineering a modern Oyo State.

He added that the project aligns with his administration’s focus to lift the people of the state from poverty to prosperity, noting that the government has, in the last two years, embarked on reducing the infrastructure deficit in the state and building infrastructure that target the economy.

While addressing those in attendance at the official commissioning of the road project, including the Olubadan of Ibadanland, Oba Saliu Adetunji, and other notable traditional rulers, especially from the Oke Ogun zone of the state, Makinde said that the delivery of the road project was another promise kept.

The governor added that the project was one of many projects that will play a major role in engineering “a modern Oyo State where the prosperity of the people through economic integration serves as the fulcrum of government’s decisions.”

The governor further stated that the economic significance of the road was well-known to the state government, hence the determination to complete it to time and specifications.

“Of course, we understood the economic significance of this road not only to individual residents but also to the growth of commerce and industry.

“The Moniya-Ijaiye-Iseyin Road is the link between Ibadan and Oke-Ogun, Oyo State’s food basket. “This road also hosts the once moribund Pacesetter Quarry and Asphalt Plant; not only have we resuscitated the plant, but it is already producing asphalt that we use in the building of our roads here in Oyo State.

“As we drive down this road, I am sure you will see the economic impact it has with the springing up of farm estates on both sides of the road. So, as we commission this road, let me again remind our people that we promised you economic development and prosperity through our Roadmap to Accelerated Development in Oyo State, 2019-2023. This is just another way that we are delivering on good governance. This is another promise kept,” Makinde said.