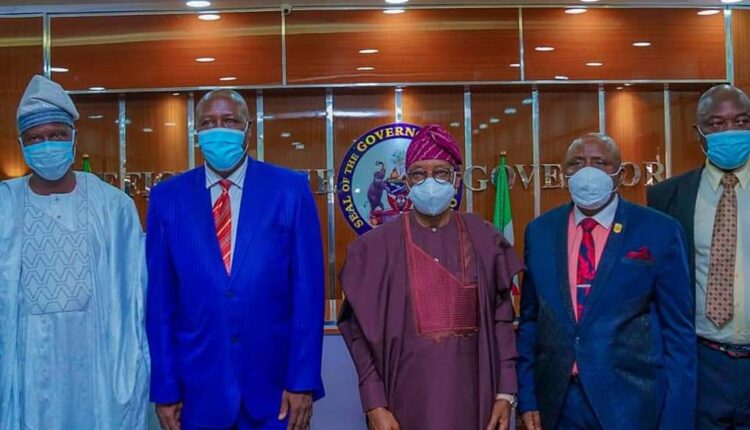 Osun State Governor, Gboyega Oyetola, has advanced reasons why his administration priortised workers’ welfare across the civil service, saying such was to promote selfless service from the government employees.

He added that upon assumption of office, his government had put into consideration possible avenues to get the best outcomes from the civil servants and arrive at conclusion that better welfare package and renumerations would spur the employees into giving their best.

Oyetola noted that in adopting the model, giving dividends of democracy to the electorates who had entrusted him with the mandate would be achieveable and such would guarantee the needed development across the state.

He stated these yesterday when he sworn-in two Permanent Secretaries as part of efforts to scale up the strength of the civil service for greater efficiency and productivity.

The governor said that the administration was committed to bringing back the past glory of the civil service, while charging the new permanent secretaries to be more dedicated and see their appointments as a clarion call to the service of the State and humanity.

Speaking during the swearing-in ceremony held at the Exco Lounge, Governor’s Office, Abere, Osogbo, Oyetola said that their elevation was an affirmation to the fact that the administration was committed to the welfare and well-being of the citizens particularly the state bureaucrats.

Oyetola who described the appointment as a necessity to stimulate the civil service for better service delivery, noted that the government deemed it worthwhile inspite of the lean resources of the state.

“It is my hope that this appointment would, apart from stiring renewed commitment from all our civil servants, knowing that it pays to be diligent and committed to building a legacy of service worthy of commendation, also rekindle the hope in many others desirous of reaching the peak of their career that this government is committed to bringing back the past glory of the Osun Civil Service.

“Just as I had promised you during the electioneering, ours is an Administration that is genuinely committed to improving the condition of service for you our teeming bureaucrats and ensuring that you receive the right motivation to deliver on your duties.

“It is for this reason we have, despite our lean resources, put you first – in the payment of salaries and other emoluments. We have also prioritised the payment of the backlogs of gratuities owed our retirees.

“This is also in addition to the recent implementation of the minimum wage -which made us one of the first states in the country to do so. We are doing all of these because we know how invaluable you are in creating wealth and delivering dividends of democracy to our people,” the Governor added.

Earlier in his welcome address, the Head of Service, Dr. Festus Olowogboyega, lauded Oyetola for taking the welfare of the workers as priority since assumption of office.

He said that the appointments had justified the love, passion and commitment of Oyetola to civil servants in the state.

Olowogboyega who described the appointments as timely and prompt, said that the elevation would go a long way to inspire, encourage and rekindle the hope of other bureaucrats particularly top echelons of the civil service in the state.

Responding on behalf of his colleague, the newly sworn-in Permanent Secretary, Taiwo Agunlejika, pledged to continue to discharge their duties with topmost dedication, commitment and loyalty.

He said: “The news of our appointments came to me as a surprise. I was surprised because I didn’t think of it. But I thank God and Mr Governor for considering us worthy. He has made us to thank and praise God from our innermost heart,” Agunlejika added.

The occasion was attended by the Deputy Governor, Benedict Alabi, Secretary to the State Government, Wole Oyebamiji, Chief of Staff to the Governor, Dr. Charles Akinola, Head of Service, Dr. Festus Olowogboyega, members of the State Executive Council, Permanent Secretaries and top government functionaries among others.