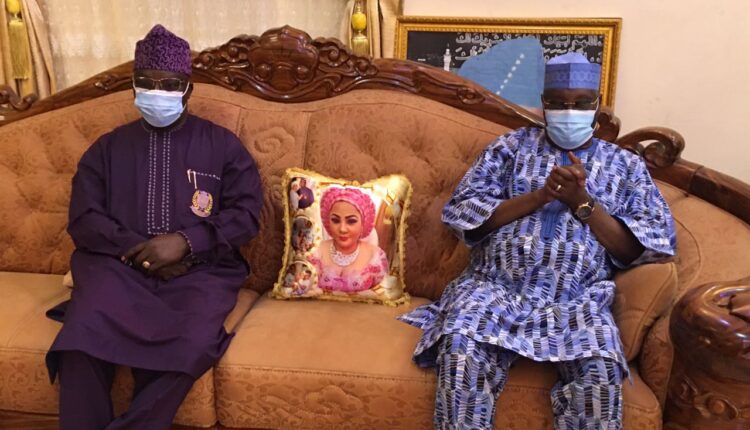 The former Vice President, Atiku Abubakar, has advanced reasons why he has been relentless about the progress and development of Nigeria despite his age, saying it was important his generation walk the talk by pulling Nigeria and Nigerians out of the wood.

He added that it has become imperative for for relevant stakeholders and politically exposed person to begin working in unison irrespective of religious, ethnic or political affiliation and throw their differences aside by ensuring Nigeria win the war against terrorism and other challenges bedeviling the country.

The former vice president added that the elite, political class and other Nigerians can only thrive in an atmosphere of peace, noting that those with right connections that can bring about lasting peace must rise up and work together to augment the government’s effort in returning Nigeria to good old days.

Speaking during his visit to the Aare Musulumi of Yorubaland, Alhaji Dauda Akinola, on Thursday in Ibadan, the Oyo State Capital, Atiku argued that the country had been divided along ethnic and religious lines and it was important urgent interventions are made to salvage the country and forestall looming disintegration.

The former vice president stated that the recent reality across the country, particularly issues bordering on banditry, kidnapping for ransom including that of school children, killings and attacks on military formations had rendered him restless and such had informed his intervention to rally round Nigerians of good will in proffering lasting solution to the challenges.

He added that it was high time every Nigerian commit to onerous task of nation building by ensuring the country begin reaching its full potential through being more patriotic and relentless about policies and programmes that could turn the nation’s fortunes around such that all Nigerians would be proud of their fatherland.

Addressing the Aare Musulumi of Yorubaland, Atiku said: “It is a pleasure that we are here today to pay a courtesy visit to the Aare and it is an opportunity to reconnect with old faces and friends personally for me and many members of my entourage.”

He added, “We have come to rub minds with the Aare and see how we can use his office to work together for the peace and progress of our country.

“Problems are part of our lives as human beings and as a nation. Our objective is to seek for ways to walk Nigeria out of its current problems and we hope that we can partner with the Aare. This is not about politics and I’m not here campaigning,” the former vice president said.

Responding, the Aare Musulumi who showed appreciation for Atiku’s visit by offering him prayers, said that he would, through his office, rally round the Muslim community and religious leaders to continue preaching unity and desist from inciting commentaries.

He said that while the issues of insecurity was of concerned to all and sundry, the people must also support the government through provision of timely intelligence to security agencies and relevant stakeholders to forestall attacks in their various communities.

He also commended Makinde for his forthrightness in identifying sports as veritable tool for economic diversification, youth empowerment and for giving the state such befitting edifice and that history would never forget his contribution to the development of sports in Oyo and Nigeria at large.

Atiku said that the projects was testaments to visionary leadership which could only be seen among politicians and public office holders of Peoples Democratic Party (PDP) extraction. He noted that as an advocate of youth empowerment, the stadium would contribute immensely to growth of sports and youth development in the state.