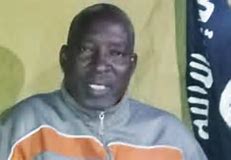 Before his murder, Andimi was declared missing after a foiled attack on Michika Local Government Area by Boko Haram insurgents but later surfaced on a video uploaded by Ahmed Salkhida, a journalist who was known for his access to the insurgent group leadership.

Akintola, through an official statement issued on Wednesday, explained that anyone who kills innocent people does not represent Islam as the religion was one of peace and tolerance of all faiths and religions.

“It is crystal clear from the antics of Boko Haram that the group is keen on igniting a religious war. They are deliberately targeting Christians for attacks in order to provoke the Nigerian Christian community. But they have failed. They have failed because Nigerians understand what Boko Haram is doing. We will not fall into Boko Haram’s trap. We call on all Nigerians regardless of religious background to unite against Boko Haram. We must stand up together to fight the evil in our midst.

“This killing is horrendous, ungodly and barbaric and we condemn it in the strongest terms possible. We have said it before and will continue to say so, that Boko Haram is not an Islamic group, rather it is a group of misled zealots.

“Any group that kills at will and sheds the blood of innocent people cannot represent a religion that is based on peace and complete tolerance of all people irrespective of the religion they follow.

“Boko Haram is an eyesore, an evil that we must not let fester in our midst, hence, we call on all Nigerians regardless of religious background to unite against Boko Haram and join hands to put an end to their tyranny once and for all.”

The director had extended his condolences to Andimi’s family and to the Nigerian Christian community, describing the deceased as a great man who lived his life in service of God and humanity.

“Our hearts are heavy today, as we remember the bereaved family. We are, however, assured that God will ease our pains and sorrow as only he can console us through these trying times. Only he can heal. We pray that the Almighty God will give succor to members of the deceased’s family, his friends, and associates.”

Akintola had charged the Nigerian Armed Forces to leave no stone on turned on a path to bringing an end to insurgency in the country so as to ensure that no renegade organization could carry out such dastardly acts again.