Some governors playing politics with banditry, others- Kogi… 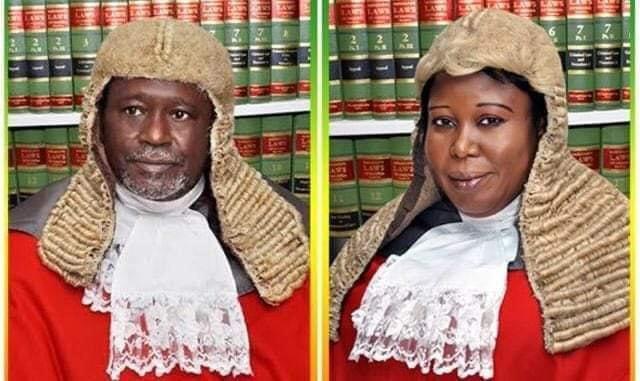 When the All Progressive Congress took charge of the affairs of our dear nation in 2015, it did not pretend about its intentions to incapacitate the judiciary. From the early days of President Muhammadu Buhari in office, an onslaught was launched on the Judiciary.

Homes of eminent Justices were raided by the DSS, Men who had meritoriously served Nigeria and contributed in no small measure to our nation’s jurisprudence had their integrity brought to public disrepute. At the end of it these witch hunting exercise , most of the noble men were not found wanting and many of those allegations were now found to be false, unfounded, malicious and mischievous.

Another instance was the imbecilic removal of Justice Walter Onnoghen as Chief Justice of Nigeria with an “exparte order” in a brazen disregard to procedures as stipulated by the 1999 Constitution of Federal Republic of Nigeria. His records and achievements were rubbished and just like the first instance, those allegations were all baseless that Justice Walter Onnoghen was persuaded to accept his premature retirement from the Bench.

Again, the integrity and independence of the Judiciary has been maligned, damaged and destroyed. These movie like orchestration of attacks also lend credence to allegations of desperation by the APC-led government and deliberate weakening of our cardinal institutions of governance.

I am bold to say that such unchecked rascality and impunity emboldened some governors to adopt same tactics, especially in Northern Nigeria to justify their religious bigotry and male chauvinism.

The first instance was Governor Atiku Bagudu of Kebbi state who refused swearing-in Justice Esther Asabe Karatu as Chief Judge of the State based on the actions of the State House of Assembly. This was an injustice Justice Karatu fought till the mandatory retirement caught up with her.

In her stead, the Governor swore-in Justice Suleiman Ambursa as Acting Chief Judge of the state.

The recent instance is the plight of Justice Beatrice Lazarus Iliya of Gombe State. At the retirement of Justice Hakila Heman as the Chief Judge of Gombe State, law of natural succession placed Justice Illiya as the successor in line with both constitutional and ethical provisions of the legal profession.

Governor Inuwa Yahaya appointed Justice Beatrice Iliya as Acting Chief Judge of the State for three months and rather than use the period to review and ratify her appointment as Chief Judge of the State, at the expiration of her tenure as Acting Chief Judge, the Governor appointed Justice Muazu Pindiga in acting capacity on December 4, 2019, and was renewed on March 4, 2020 in a total breach of section 271 subsection 5 of the 1999 Constitution of the Federal Republic of Nigeria(as amended).

It is on record that “In its meeting of August 21, 2019, and by a letter ref. No. JSC/GMS/S/ADM/21/270 dated September 2, 2019, the Gombe Judicial Service Commission (JSC) shortlisted and forwarded the name of Justice Beatrice Lazarus Iliya as its preferred candidate and that of Justice Muazu Pindiga as a reserved candidate to the National Judicial Council for recommendation to the governor.

It is a shocking discovery that while the wait was on for the re-presentation of their names after satisfying all the requirements of the NJC, the JSC headed by Justice Pindiga, on March 19, 2020, at a meeting where the Commissioner for Justice and Attorney General of Gombe, Zubairu Umar, served as pro-tempore chairman.

Umar wrote a memorandum to the JSC and excluded Justice Beatrice name as a candidate to be re-submitted to the council.

To puncture this lame and not deeply thought out argument, from 1987 till 2016, all the Chief Justice of Nigeria were all from northern Nigeria.

In furtherance of my argument, section 270, subsection “4” and “5” of the 1999 Constitution of the Federal Republic of Nigeria(as amended) also favours the appointment of Justice Illiya as the CJ of Gombe State. It states and I quote;

(4) If the office of Chief Judge of a State is vacant or if the person holding the office is for any person unable to perform the functions of the office, then until a person has been appointed to and has assumed the functions of that office, or until the person holding the office has resumed those functions, the Governor of the State shall appoint the most senior Judge of the High Court to perform those functions. (5) Except on the recommendation of the National Judicial Council an appointment pursuant to subsection (4) of this section shall cease to have effect after expiration of three months from the date of such appointment and the Governor shall not re-appoint a person whose appointment has lapsed.

It must also be stated that Rule 26 Sub Rule Two, of the Rule of Professional Ethics(legal provisions) provides that there is seniority at the Bar.

A juxtaposition of the actions of Governor Inuwa Yahaya of Gombe State and constitutional provisions on the appointment of Chief Judge of a State will show that one may never be far from the truth if he or she claims Justice Beatrice Lazarus Iliya is not been sworn-in as the CJ of Gombe State because of religious bigotry, gender bias and male chauvinism.

We have kept quiet for so long and they have remain unrelenting in perpetrating injustice on all fronts.

We cannot be silent again, we must speak up because our silence is no more golden but evil.

Deyemi Saka
(Lead Partner)
Saka is a Lead Partner at Lambert and Curtis.

Nigeria: Insecurity and getting yourself a gun