What Osinbajo told us about N90bn allegation – CAN 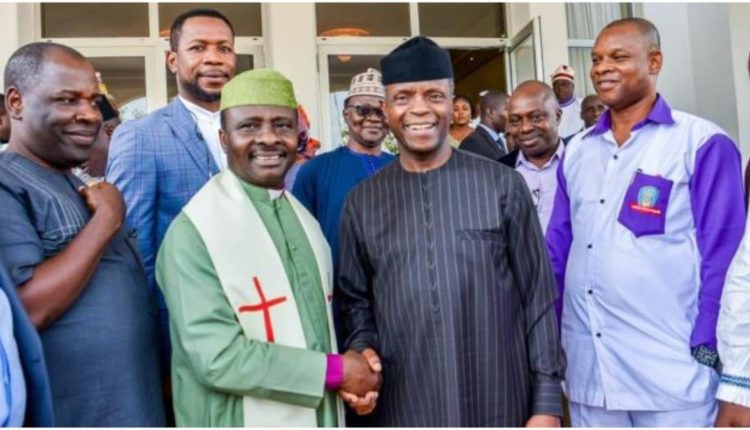 The leadership of the Christian Association of Nigeria (CAN) has disclosed  that Vice President Yemi Osinbajo told them  that N90 billion allegation levelled against him was baseless and rubbish during their closed door meeting with him.

Pastor Adebayo Oladeji, spokesman to CAN president, Rev Supo Ayokunle, in a statement on Sunday gave more details about the meeting  with the Osinbajo.

Oladeji said that during the meeting, vice president described the allegation as baseless and rubbish.

“CAN leadership visited the Vice President Yemi Osinbajo last Friday to hear his side of the story instead of rushing to the press either to condemn him or throw our weight behind him. This we believe, there is no law that is against our action,” the statement said.

“After we had interacted with him and he said that the allegation was baseless and should be treated as rubbish, and not only that, he said that he was going to pursue the matter legally to prove his innocence, we then assured him that if he is proved innocent, then we throw our weight behind him. We thereafter prayed for him and our nation Nigeria. We urged him to continue to serve the nation with clean hands.

“The leadership of CAN has never endorsed corruption. In our earlier visits to President Muhammadu Buhari, we had praised him for fighting war against corruption but urged him to make it comprehensive, sparing no one irrespective of political affiliation,”Ayokunle said.

The statement also recalled what the CAN told journalists: “We were there to pray for him and also to let him tell us about the allegations against him whether true or false and he has cleared the air that there was no iota of truth in what some people decided to bring out against him.

“And he was ready to prove himself (innocent) and to go all out with them. If there is an allegation, there must be evidence to prove it. Therefore, he said we should see it as rubbish. It can never happen with him and it has never happened.

“If the allegation was not true and the people who alleged cannot prove it, then, you know that the Church will be very proud of him, and will continue to be proud (of him) and we are praying for him and we are also saying that nobody should toy with the innocent that are faithfully serving us in the nation for whatever reason, the whole of Nigerians we rise together to fight such people,” CAN president said.