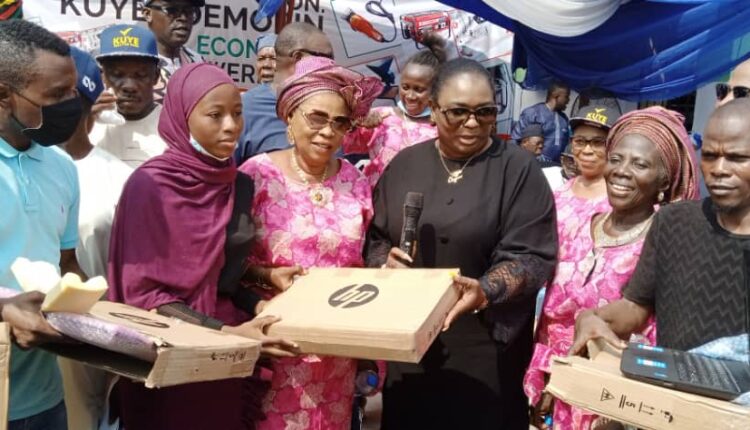 The chairman of the ad-hoc committee on abandoned properties at the House of Representatives, Ademorin Kuye, has again empowered another round of over 300 artisans and traders in Somolu Federal Constituency, in order to boost their productions and increase their daily earnings in Lagos State.

Among the beneficiaries that got items from the lawmaker, were: Hairdressers that received driers, Barbers, fashion designers, petty traders, as well as several others selected from Shomolu, Bariga, and other communities that made up the lawmaker’s constituency.

These tools were given out to the artisans and traders during an economic empowerment programme put together by Kuye at his constituency office in Bariga on Tuesday and was attended by several chieftains of the All Progressives Congress (APC) including the party chairman for the council, Gbenga Abdullahi, Denge Anifowoshe and others.

Justifying the need for the programme, Kuye said that the reason for the initiative was the promises made to the electorate during the election that efforts would be made for them to enjoy the dividend of democracy including empowerment programmes.

He added that the aim behind sponsoring the initiative solely was also to ensure these beneficiaries, including those that have completed their training, remain in skill they have learnt, do business always and get improvement in their daily profits.

Kuye, who was represented by the Chairman of the Kuye Ademosin Economic Empowerment programme, Bowale Shosinmi, hinted that Kuye had concluded plans for another round of empowerment which would be coming up soon within the constituency to cater for those that were not included in this phase of empowerment.

The chairman, meanwhile, tasked the beneficiaries to make good use of the items collected from the lawmaker by adding the items to their collection of tools to boost sales and employ more skilled labour to reduce the unemployment rate across the state.

“My advice to the beneficiaries is that a lot of people are in need of these items and for you to have been chosen, it is an indication that you were lucky that your name was selected in this batch; so use the items perfectly”, he added.

Earlier, the APC chairman, Abdullahi, described the empowerment programme as the tip of the iceberg, saying there were more programmes already lined up by the lawmaker and other public officeholders from the party to boost development across the constituency.

He added that the empowerment was an addition to centres set up and funded by Kuye to ease National Identification Number (NIN) collection for residents of the constituency particularly varsity admission seekers in the state.

The Beneficiaries, while speaking to The Guild, commended the vision of the lawmakers and described him as a worthy representative that should be allowed to return again possibly higher position.

One of the beneficiaries, Adedoyin Joshua, who could not hide her joy after a sewing machine was handed over to her, stressed that the lawmaker had put an end to the debt she would have incurred from the purchase of the item.

Another beneficiary, Shakiru Osholokun, a fashion designer, said: “I have heard about it but did not believe anyone could do such but today, I am convinced that it is real and I want to thank the lawmaker for the kind gesture extended to him.