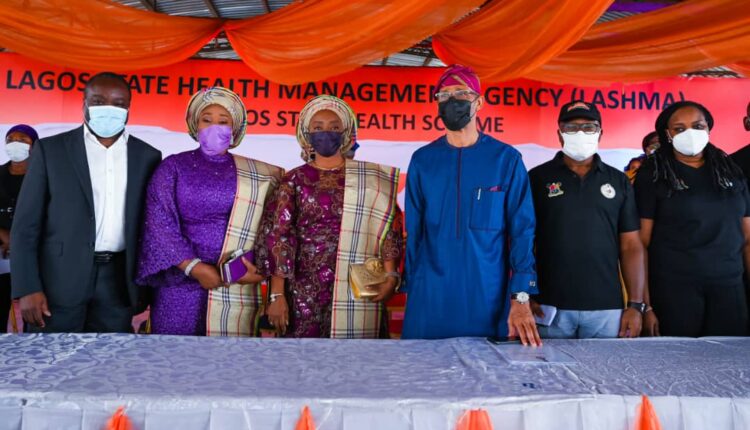 The Lagos State First Lady, Dr. Ibijoke Sanwo-Olu, has reiterated the state government commitment towards following to the latter the provision of Universal healthcare coverage that guarantees specific health‐care benefits package to all Lagos residents.

She added that irrespective of religious, ethnic, and political differences, no Lagosians would be left behind in the coverage of quality healthcare across broad through the provision of financial risk protection in the course of accessing healthcare in the state.

Sanwo-Olu explained that the government would stop at nothing in providing good health care and erect structures and health facilities that would guarantee quality healthcare services.

The first lady maintained that the state government would continue putting policies in place that would expand coverage of families across Lagos, particularly the vulnerable.

Aside from the families, Sanwo-Olu said that the administration would also continue putting world-class facilities in place that would attract and retain qualified healthcare professionals.

“We are determined to leave no one behind. We encourage every Lagos resident to make the right choices by signing onto the scheme. Doing that will help us cover every Lagosians and make it easier to take care of the vulnerable,” she said.

Also speaking, the state’s Commissioner for Health, Akin Abayomi, said that the insurance scheme was aimed at giving soft landing to Lagosians, particularly those living close to the poverty threshold across the state.

He added that the Governor Babajide Sanwo-Olu-led administration was not oblivious of the current challenges facing Nigerians and that such informed the decision to slash the Federal Government percentage placed on insurance scheme to ensure Lagosians were covered irrespective of their economic status.

According to him, we have put in place several measures, including a financial model that can provide quality healthcare for those close to the poverty threshold.

On his part, Chairman of LASHMA Board, Dr Adetokunbo Alakija said Ilera Eko would be celebrated annually to mark the state’s journey to 100 percent coverage of the informal sector into the state health scheme.

Under the LSHS, the premium for a family of six is N40,000 per annum, while N8,500 is for individual within the same period.

The healthcare services covered under scheme include outpatient care for common ailments and conditions; maternal, newborn, and child care including caesarian section where necessary; access to family planning counseling and services; management of uncomplicated chronic diseases such as hypertension, diabetes, asthma, among others; access to HIV and TB testing services; minor surgeries such as incision drainage, herniorrhaphy, appendectomy; and health promotion and diseases prevention.