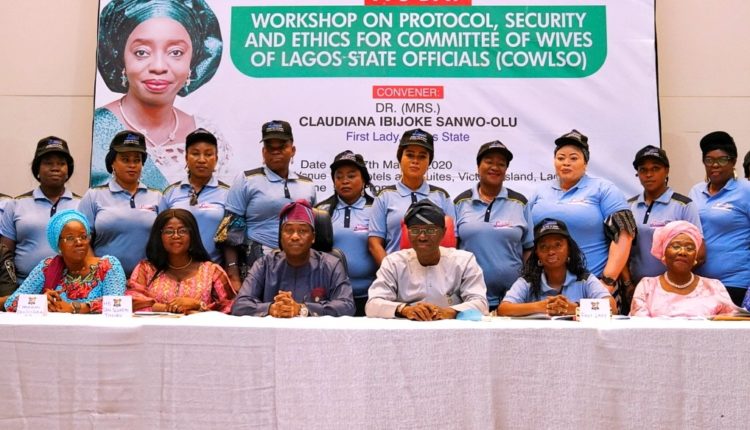 The Lagos State Governor, Babajide Sanwo-Olu, has revealed that the state has curtailed threat of the deadly coronavirus infection, saying that such feat has been achieved through hardwork and also by the grace of God.

Sanwo-Olu explained that the viral pandemic, covid-19, was a global health issue but that the state had successfully put paid to it, hinting that such had been as a result of adoption of proper protocol as well as prior preparations which made it easy to respond quickly immediately the threat presented itself.

The state governor stated that works, efforts and prayers of Lagosians as well as Government had gone a long way in facilitating the successes registered in its fight against coronavirus infection and spread in the country.

Speaking on Friday, at the opening ceremony of a three-day workshop on Protocol, Ethics and Security for members of the Committee of Wives of Lagos State Officials (COWLSO) which held at Eko Hotels and Suites, Victoria Island, Sanwo-Olu, who commended women for their immense contributions to the wealth, health and wellbeing of of society, reiterated that more was needed to be done in order to ensure success of government’s efforts over health of its people.

He reiterated that all hands should be on deck in the fight against the novel virus, adding that Nigeria was at a state where everybody needed to come together and take issue of safety and disaster prevention seriously, especially in terms of avoiding acts that could have devastating consequences on the general public.

The state’s first citizen lauded women for their abilities to multi-task and build nations, stating that the Nigerian woman’s resilience was such that any cause they support was assured of success and added that their support was necessary in his administration’s continued drive to keep coronavirus out of the general population.

“Covid-19 (CoronaVirus) is a global health issue. We are thankful that God has also raised Lagos State up at this time again and as we speak, we have been able to curtail it and because we are also very prayerful, we believe that God will also help us because we don’t need such distraction in our country,”

“Even as we speak, this country has many challenges and because you are our mothers and you are our spouses, we believe that God has given you that capacity to be able to help us take this country to another level, we know that whilst we have many things to deal with, we can only do one thing at a time but women are multi-talented; you are multi-skilled; you are the ones that can breastfeed and be making pounded yam while also preparing Egusi soup and ensuring that kids go to school. Above all, you make money for the family and your businesses are still thriving”.

Sanwo-Olu , who enumerated possible emergency areas which had been faced by the state, listed fire incidences which he said were prevalent as a result of adverse weather conditions in the state and added that such could be avoided by following basic rules of safety, such as placing flammable substances or fuel outside the home or shop in order to avoid fire incidence.

He expressed appreciation for the state’s emergency response agencies, stating that they had given prompt and first-class response to emergencies in health, fire, accidents and other incidents in the state and that they were a major reason why Lagos had been able to curtail the happenings of such events.

However, the governor urged Lagosians and women in particular to be more safety conscious, follow safety rules and hold home and environmental cleanliness in high regards throughout the state.

Also speaking at the event, the state’s Deputy Governor, Obafemi Hamzat, expressed admiration for COWLSO leadership saying that they had continued the body’s tradition of excellence and support of good governance in the state through laudable initiatives such as Spelling Bee Competition, One Day Governor and the annual National Women Conference.

Hamzat made mention of the administration’s decision on implementation of the Lagos State Extant Traffic Law, which restricted activities of commercial motorcycle and tricycle, popularly known as Okada and Keke Napep, in several arears of the state, and said that the decision had been informed by security risks posed against lives amd properties of Lagosians.

He disclosed that several intelligence reports had been recieved by state security outfits which alleged that Okada was used to deliver drugs to school students, as well as other incidents of criminality being attached with activities of their riders.

The deputy governor explained that apart from marked reduction in the incidence of accidents since the restriction was implemented, the state’s Air Quality Update had also made vast improvements, showing that Lagosians enjoyed reduced air pollution as a result of goverment’s decision.

“By restricting Okada, you know CNN (Cable News Network) normally does Air Quality Update across the world and if you have noticed, Lagos was persistently on number five which is the worst and even Libya is on one but yesterday, we were on two. It is not Lagos State report, it is CNN report,”

“Those machines are two-stroke engines therefore they release a lot of pollution and so the restriction will allow us to breath in good air and in the process make all of us to live longer”.

He urged COWLSO members to sensitize Lagosians under their spheres of influence on the benefits of the restriction as well as benefits of government policies upon lives of its citizens and state residents.