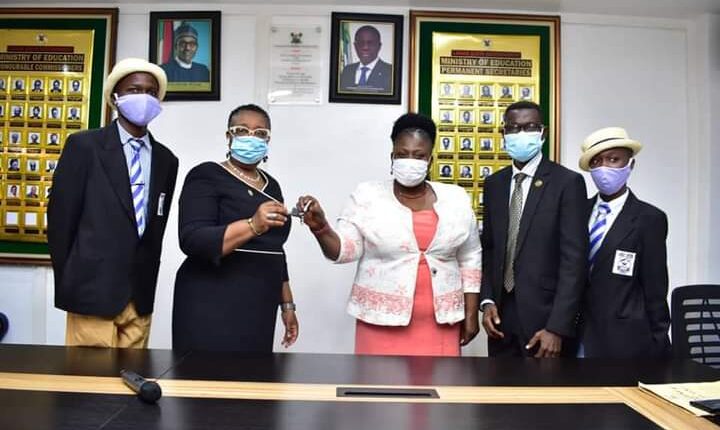 The Commissioner for Education in Lagos State, Folasade Adefisayo, has cautioned teachers in public schools not to rely on the achievements recorded in the education, rather, to strive towards improving on the sector in the state.

Adefisayo added that the achievements recorded by the teachers and through the students must be improved upon to bring the state education sector particularly public schools to an enviable height that could rival any globally.

She gave the charge during the official presentation of the key to a bus won by Oriwu Senior Model College as the Best Public School at the Y2020 Presidential Teachers/Schools Excellence Award ceremony.

While cautioning the teachers against complacency,  the commissioner reaffirmed the Babajide Sanwo-Olu administration’s commitment to providing a conducive environment for teaching and learning and ensure students have access to total quality education often.

Adefisayo attributed the success of Oriwu College and other achievements recorded recently to the huge investment made by the present administration to boost development in the education sector.

The Commissioner stressed that Lagos State has continued to be outstanding in various competitions and award ceremonies, which is a testament to the efforts and collective commitment towards adding value to the sector especially ensuring that no child is left behind in the drive for total educational development.

She commended the Tutor-General/Permanent Secretary, Education District II, Anike Adekanye, for her dedication, as well as, making the State proud through the emergence of the overall best Public School in Nigeria from her district.

Receiving the bus on behalf of the School, Tutor-General/Permanent Secretary Education District II, Anike Adekanye, remarked that Education District II has continued to win laurels at National and International programmes due to the great improvement in the education sector and the unwavering support of the State government.

Adekanye stressed that four of the teachers in the district received four cars out of the 12 presented by the Governor to teachers during the recent Merit Award, noting that the State Government also presented a three-bedroom apartment to a teacher from the district, Agnes Elusaki, from the district after winning the overall best teacher in the country.

The TG/PS appreciated Governor Babajide Sanwo-Olu for his visionary leadership towards revitalising the education sector as outlined in the T.H.E.M.E.S Agenda, maintaining that the integration of technology in learning and provision of infrastructure has engendered better performance and results.