We are not investigating Osinbajo over alleged corruption in NSIP-EFCC 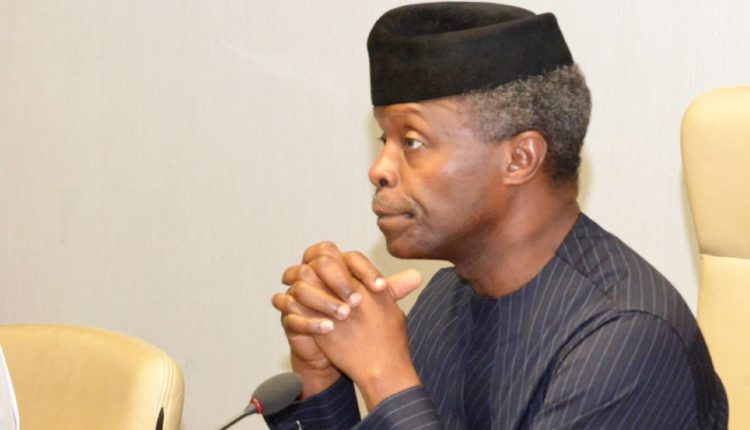 The Economic and Financial Crimes Commission, EFCC, has declared that it is not investigating the Vice President, Yemi Osinbajo and the National Social Investment Programme, (N-SIP).

EFCC insisted that at no time did its spokesperson,  Wilson Uwujaren, made any reference to N-SIP as a programme or accused those who superintend it of corruption.

In a statement issued by the commission’s spokesperson, Wilson Uwujaren, and made available to newsmen, the anti-graft agency cautioned against reports, which could project a false indictment and incite Osinbajo against its Chairman, Ibrahim Magu.

“The attention of the EFCC has been drawn to a report captioned, “There is corruption in N-SIP programme- Magu”, which appeared in a newspaper on Wednesday September 25, 2019 and a few other newspapers, in which the acting Chairman of the Commission, Ibrahim Magu was quoted as saying that there is corruption in the National Social Investment Programme and the Anchor Borrower’s Programme.

“The papers claim that Magu, who spoke through the Spokesperson of the agency, Wilson Uwujaren at the 15th Anti- Corruption Situation Room organised by the Human and Environmental Development Agenda in Kaduna on Tuesday September 24, 2019, asked the civil society organizations “to investigate the N-SIP,”the statement reads.

“The commission wishes to disclaim the reports as false and a mischievous twist of the goodwill message presented by Mr. Uwujaren, on corruption and peace building in conflict communities.

“In the presentation, the EFCC spokesperson observed that the agency had received complaints in some zones regarding the social investment programmes, citing an example in Gombe where the Commission investigated a case in the Anchor Borrower’s Scheme in which sand was bagged and passed off as fertilizer.

“He, therefore, warned that for the crises in these conflict zones not to degenerate, civil society organisations should play more active roles in monitoring the programmes to ensure that their benefits get to the people for which they are intended,” the statement added.

“At no time in the presentation did Mr Uwujaren mention the N-SIP as a programme nor did he accuse those who superintend it of corruption. The specific case mentioned, the Anchor Borrower’s scheme, is not part of the N-SIP being supervised by the office of the Vice President.

“This clarification becomes necessary to correct the wrong impression of a verdict of corruption on N-SIP by the EFCC which the purveyors of the false reports obviously want to create,” the agency said.

“The EFCC chairman recognizes the unprecedented impact of of the N-SIP intervention in not only lifting the poor out of poverty but also its potential for reconciling feuding communities across the country,”EFCC added.

“It is, therefore, shocking to read the unfounded insinuation of the reporters, aimed only at fanning the embers of disaffection that only exist in their imagination.

“The sensational attempt to project a false indictment, and incite the Vice President against the person of the Chairman of the EFCC, is therefore condemnable,” the agency said.