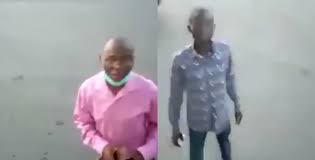 A resident of the Abeokuta region in Ogun State has allegedly locked his son, Obafemi, out of the house, saying that the young man would not be allowed into the family abode until a negative coronavirus test result has been received.

The man, who identified himself as a retired Road Safety Corps officer, claimed that Obafemi had arrived from the coronavirus epicenter of the nation, Lagos State, in disobedience to the states’ governments inter-state movement restriction and non-compliance with the father’s wishes.

He said that due to recent pandemic realities in the nation, persons who may have had contact with the viral infection should be isolated from others and tested for the disease and that allowing Obafemi into the home was a risk of contracting the disease that he was unwilling to take.

The man reiterated that Obafemi would remain locked out until he was certified coronavirus free by relevant state authorities, and added that the refusal to harbor the son was his contribution to curbing spread of the deadly viral pandemic in the state.

Watch the full video below:

A father in Abeokuta refused to allow his son who came back from Lagos to enter his house. Insists he must get tested for #Coronavirus first. pic.twitter.com/eUOSQNiAuH