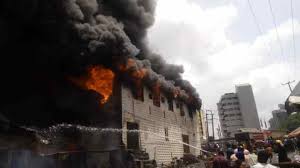 A raging inferno broke out at the popular Dugbe Market located in Ibadan, Oyo State, razing buildings and destroying shops in the ancient city.

The fire, which engulfed shops and warehouses containing fashion items like handbags, shoes and other items, along Dugbe Alawo and Lebanon areas, was said to have destroyed stocks worth several millions of naira before it was finally put out.

The Guild gathered that men of the Central Bank of Nigeria (CBN) Fire Service Station, as well as their colleagues from the State Fire Service, were promptly on the scene with three water tankers, with which they battled the rising inferno and successfully quenched the flames.

Traders with shops in the affected areas while lamenting the loss of goods and buildings to the fire, however, expressed appreciation for the efforts made by the firemen, saying that without their help, more loss would have been recorded to the inferno.

They added that intervention by policemen and firemen had saved traders who would have been trapped in the fire, and that the market could record that it had lost no lives to the incident as a result of the bravery and patriotism displayed by the respondents. 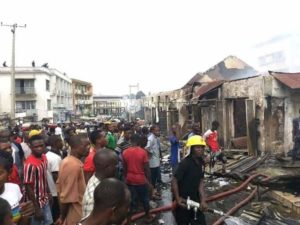 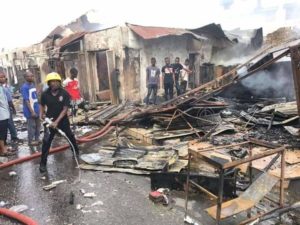