The battle to secure APC presidential ticket was tough-… 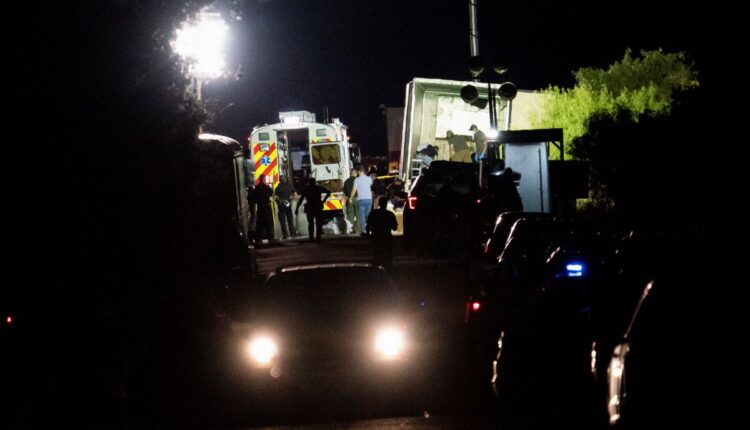 No fewer than 46 dead bodies of migrants have been reportedly discovered inside a tractor-trailer in San Antonio, Texas, city by the United States Police.

The death was said to have been caused by suffocation following heat stroke and is one of the most deadly recent incidents of human smuggling along the U.S.-Mexico border.

Confirming the incident, a San Antonio Fire Department official said that they found stacks of bodies and that there was no signs of water in the truck, which was found next to railroad tracks in a remote area on the city’s southern outskirts.

According to the official, 16 other people found inside the trailer were transported to hospitals for heat stroke and exhaustion, including four minors, but no children were among the dead, the department said.

“The patients that we saw were hot to the touch, they were suffering from heat stroke, exhaustion,” San Antonio Fire Chief Charles Hood told a news conference. “It was a refrigerated tractor-trailer but there was no visible working A/C unit on that rig.” It said.

The city’s Police Chief, William McManus said that a person who works in a nearby building heard a cry for help and came out to investigate and that the worker found the trailer doors partially opened and looked inside and found a number of dead bodies.

McManus disclosed that this was the largest incident of its kind in the city and said three people were in custody following the incident, though their involvement is not yet clear.

On his part, a spokesperson for U.S. Immigration and Customs Enforcement (ICE) said that its Homeland Security Investigations division was investigating an alleged human smuggling event in coordination with local police.

Also, Mexico’s Foreign Minister, Marcelo Ebrard through his social media handle, on Tuesday, said that the suffocation of the migrants in the truck the tragedy in Texas and that said consular officials would go to the hospitals where victims had been taken to help however possible.

As gathered, the issue has proven difficult for U.S. President Joe Biden, a Democrat who came into office in January 2021 pledging to reverse some of the hardline immigration policies of his Republican predecessor Donald Trump. Republicans have criticized Biden’s border strategy ahead of the midterm congressional elections in November.

Temperatures in San Antonio, which is about 160 miles (250 km) from the Mexican border, swelled to a high of 103 degrees Fahrenheit (39.4 degrees Celsius) on Monday with high humidity.