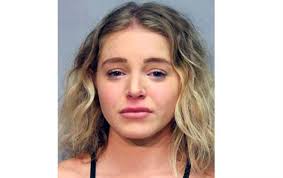 The Hawaii police has arrested an American social media model, Courtney Clenney for killing her Nigerian boyfriend in United States of America.

The law enforcement in Hawaii was said to have arrested the social media model on a charge of second-degree murder with a deadly weapon.

The Hawaii County police said that they assisted the U.S. Marshals Service as they arrested the 26-year-old in Laupahoehoe, which is on the big Island.

He noted that officers used an arrest warrant issued by Miami-Dade County, Florida.

According to him, she’s being held at the East Hawaii Detention Center while she waits for her initial court appearance in Hilo District Court on Thursday.

In a statement released on Thursday, it gave no details about the accusations against her, but the Miami Herald reported that Clenney is accused of fatally stabbing her boyfriend in April.

Her Miami defense lawyer, Frank Prieto, told the Miami Herald that she was in Hawaii while in rehabilitation for substance abuse and post-traumatic stress disorder.

“I’m completely shocked, especially since we were cooperating with the investigation and offered to voluntarily surrender her if she were charged,” Prieto said. “We look forward to clearing her name in court.”