CBN, Bayelsa to take 3500 rice farmers, others through…

US may lift embargo on AstraZeneca’s vaccine nationwide rollout 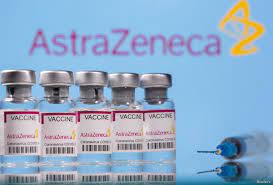 Barring any last-minute changes, United States may give approval for the nationwide rollout of AstraZeneca’s coronavirus vaccine after data from a large cross-country trial showed it was safe and effective.

As stated, AstraZeneca’s coronavirus vaccine received a major boost on Monday after the data, a development that could potentially pave the way for its emergency authorisation in the United States as countries in Asia accelerated its rollout.

The trials in the United States, Chile, and Peru showed the vaccine was 79% effective at preventing symptomatic COVID-19 and could bolster confidence in the product after confusion over its efficacy data, dosing regimen, and possible side-effects.

Many European countries halted the use of the AstraZeneca shot earlier this month after some reports that it was linked to blood clots, but have since resumed inoculation after a regional regulator said it was safe. A survey on Monday showed Europeans remained skeptical over its safety.

Leaders in Asia have sought to boost public confidence by taking the AstraZeneca shot themselves amid concerns a slowdown in the global vaccination rollout could hurt the fight against COVID-19, which has killed over 2.8 million people worldwide.

The AstraZeneca shot was among the first and cheapest of the COVID-19 vaccines to be developed and launched at volume and is set to be the mainstay of vaccination programmes in much of the developing world.

“I have just finished getting the (AstraZeneca) injection, there is no pain at the injection site, and there is no soreness of the body,” Taiwan Premier Su Tseng-chang told reporters as the island launched its inoculation campaign on Monday.

Thailand’s prime minister also became the first person in the country to be inoculated with the AstraZeneca vaccine after its rollout was temporarily put on hold over safety concerns, while Indonesia began using it on Monday after suspending it last week. But Indonesia’s Food and Drug Agency has warned against its use on people with blood clotting disorders.

South Korean President, Moon Jae-in, 68, plans to get the shot on Tuesday after the government said it could be used on older people.

Moon sought to reassure the public on Monday that the AstraZeneca shot was safe and encouraged people to take it.

“Vaccination is to protect not just yourself but also our society as a whole by creating herd immunity,” he said.

British Prime Minister, Boris Johnson, received his first dose of the AstraZeneca COVID-19 vaccine on Friday, saying he “did not feel a thing.”