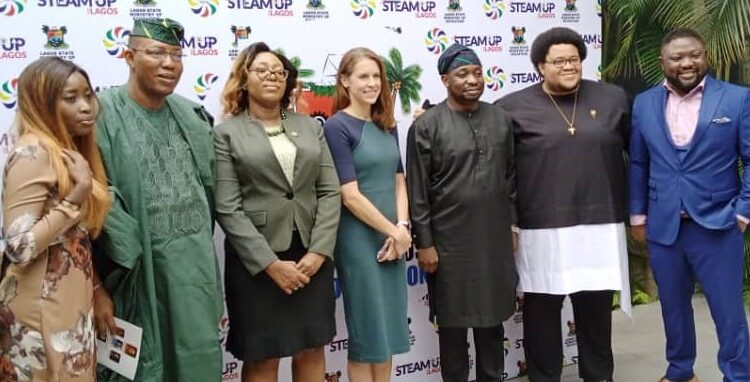 The United States (US) and Lagos State Government have said that adoption of hands-on engagement learning mode for students between secondary and tertiary education would assist Nigeria in solving present challenges and proffer solutions to future issues.

They said that the development and innovations currently been recorded globally were product of Science and engineering practicals adopted by the countries to solve their challenges, saying, Nigeria especially Lagos can do it and produce the tech-experts that would drive next set of global innovations.

These were said at the Science, Technology, Engineering, Art and Mathematics (STEAM) UP Lagos Convention organized by the Senior Special Assistant to the governor on Education, Adetola Salau, which was attended by the Commissioner for Economic Planning and Budget, Sam Egube, and his Science and Technology counterpart, Hakeem Fahm, held in Victoria Island.

The US Consul General, Claire Pierangelo, said that the world is currently been driven by science and technology because they were found to have possible solution the global challenges.

Pierangelo stressed that Nigeria especially Lagos cannot seatback and watch, rather must be involved in innovation, saying, this can be achieved through STEM teaching.

The Consule-General, who was represented by the Deputy Public Affairs Officer for US Consulate General in Lagos, Jennifer Foltz, commended the Lagos state government for the initiative and disclosed that it would complement the US government annual training for women on STEM.

She added that since 2013, the government had been offering scholarship to Nigerian women to get the requisite knowledge on STEM in the US and that over 44 women have been trained.

Earlier, Salau said that unlike the Science, Technology, Engineering and Mathematics (STEM), the the Lagos brand has added Arts to cater for students that were not core science and technology inclined, in other not to excluded anyone from the drive to build Techprenuers across Lagos.

According to her, we do not want to exclude anyone because all contributions, including those that are not core science student quota, is needed to ensure adequate development of STEM in Nigeria particularly in Lagos State.

And to ensure this quota is not lost, the Senior Special Assistant to the governor hinted that the STEAM UP Lagos project is hinged on four pillars including Curriculum design and integration, teacher engagement/training in modern STEAM pedagogy, set up of STEAM laboratories/cafes and engaging students in learning, boosting extra-curricular STEAM activities.

“With these four themes, we aimed to move learning from the monotonous mode of memorisation to practical, hands-on engagement for students and equipping young Lagosians between secondary and tertiary institutions with skills for immediate personal and financial productivity.

“From this, we will be able to achieve Mr. Governor’s 10-year technology innovation plan of a future generation of Lagosians who are techprenuers and makers like the electric car manufacturer, Elon Musk and others”.

Salau further stressed that the vision of the Lagos state government cannot be achieved sole by the public officers rather it required participation of private sector to achieve the desired dream for Nigeria.

“No developmental stride anywhere in the world can succeed without the direct partnership of the organised private sector. And that is why we are soliciting for everyone’s financial and sundry support towards the actualisation of the four cardinal aspects of the project as it ties into their organisational goals and specific Corporate Social Responsibility (CSR) thematic focus area”.