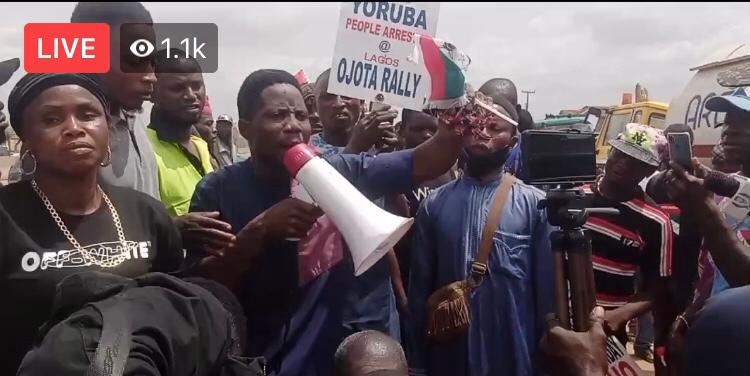 Following arrests of about 60 members of Yoruba self-determination movement, Yoruba Nation, by the Directorate of State Security (DSS) and Nigerian Police, Lagos Command, the agitators have issued a seven-day ultimatum to the Federal and Lagos State Governments, demanding that they order the release of their members currently under detention in Federal Capital Territory (FCT) Abuja and Lagos.

Within this seven-day, the agitators, who were requesting for secession of the Southwest region from Nigeria, further demanded that the apex government directs DSS to stop trailing Yoruba activist, Sunday Adeyemo popularly called Sunday Igboho, as well as compensate him alongside families of their two members killed during his house attack.

They threatened that, after the expiration of the seven-day ultimatum, plans had been concluded to embark on any action that could further help to actualise their secession from the country, saying over 70 million Yorubas have concluded plans to engage in any activity that could bring freedom from Nigeria.

The agitators issued the ultimatum on Wednesday when they marched on the streets and barricaded the entrance to Oyo State Governor, Seyi Makinde’s office where they threatened that the only solution for them to shelve their plans to go on a rampage was for the central and Lagos state governments to address their demands immediately.

During the demonstration which came less than a week after security operatives attacked Sunday Igboho’s house, arrest 13 members, and picked over 40 others while participating in a peaceful procession in Lagos, they argued that what they had done previously were less to the activities they were about to unleash across the region if the seven-day ultimatum elapse without the governments yielding to their demands.

While marching on the streets of Ibadan, the agitators, who were armed with large banners and different sizes of placards to express their displeasure over the DSS attack on their leader’s house and Nigerian Police, Lagos Command arrests of fellow Yoruba Nation supporters during the demonstration, argued that their fundamental human rights have been violated.

Aside from the banner displayed which had the pictures of Yoruba-self determination group, Ilana Omo Oodua (IOO) leader, Prof. Banji Akintoye, and Sunday Igboho, the protesters chanted different anti-government songs including ‘No retreat, no surrender!”, “Oodua Nation!”, “Sunday Igboho is not a criminal,” and others.

The placards displayed by the demonstrators reads: The Govt of Nigeria should stop killing the Yorubas’, “Free Lady K. now,” “Who killed Awolowo? Fulani; Who killed Abiola? Fulani; who killed Bola Ige? Fulani; who killed Dele Giwa? Fulani,” “We want independent, not autonomy, our fatherland is our birthright,” “Igboho is a man of freedom,” among others.

The protesters said they were peaceful in their demand for Yoruba Nation and that it was the Fulani that had been terrorizing the Southwest and the nation that should be attacked by the law enforcement agencies in the country.

The Pro-Yoruba Nation agitators claimed that the allegation that Sunday Igboho stockpiled arms in his house was false, saying ammunition and other incriminating evidence displayed were not found in their leader’s house in Soka axis of the state.

Expressing their displeasure, the group also requested the release of agitators, who were arrested by Nigerian Police during the Yoruba Nation rally held in Lagos State, over the weekend.