Buhari has delivered on campaigns promises –… 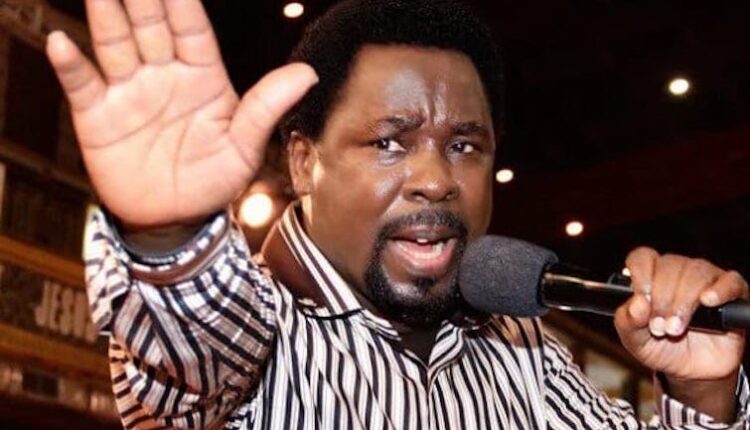 The Lagos State Governor, Babajide Sanwo-Olu, and his Ondo State counterpart, Rotimi Akeredolu, were among the dignitaries that bid the founder of the Synagogue Church Of All Nations (SCOAN), Temitope Joshua, popularly called T.B Joshua, farewell as his body was laid to rest.

Also at the burial of the cleric was the Ondo state deputy governor, Lucky Aiyedatiwa, the Ooni of Ife, Oba Adeyeye Ogunwusi, Dele Momodu, and other dignitaries were at the church premises gracing the burial ceremony.

At the occasion attended by several dignitaries including foreigners, tears and tributes continued to flow as he was laid to rest within the church premises, one month after he passed on, barely a week to his 58th birthday.

During the burial event on Friday, which marks an end to a week-long funeral service, Akeredolu, who described TB Joshua’s death as a loss to the entire world, said that the late clergyman left indelible prints and impacts which were visible in many parts of the world.

He said, “The people of Ondo State, Nigeria and the entire world have lost a rare gem, a special breed, and a worthy citizen and a true son of Ondo State.

“His passing is not only a loss to the people of Ondo, his own town, Arigidi-Akoko, but a loss to humanity. The indelible prints and impacts of our dear brother, T.B Joshua are visible not only in Ondo, our State, they’re visible in many parts of Nigeria and in fact, throughout the world.

“No wonder this is a world congregation. I’m not too sure we’ve had the world so congregated in this number from different countries in many such services, maybe, that of Nelson Mandela but the world is more represented here than when Nelson Mandela was buried. Indeed it was and is being globally acknowledged today by all of us,” the governor added.

He, meanwhile, disclosed that the deceased cleric gave him a lot of money after the Independent National Electoral Commission (INEC) declared him the winner gunernatorial election for the first term.

“Prophet TB Joshua when I won election as governor of Ondo state, he drove to Owo state, he said to me that I have been elected as governor but he has come to pray for me and when he was leaving, he put something in my pocket. And when I asked, he replied that I will need to use the money to entertain guests.

Also, Sanwo-Olu, in his tribute, titled: ‘Celebration of life and legacy of Prophet Temitope Joshua, described him as an intentional man of God that fulfilled destiny.

The governor stressed that the late televangelist was an ‘uncommon minister’ that over the years impacted people within and outside the shores of Nigeria positively.

The governor, who was represented by the Commissioner for Home Affairs, Olanrewaju Elegushi, added that the pastoral, wise counsel and philanthropic gestures of Joshua would be sorely missed by all.

Addressing the congregation, Ooni, who was represented by his wife, Naomi, described the cleric as a philanthropist and humble man, urging Nigerian religious leaders to emulate him.

He noted that T.B Joshua’s lifestyle should serve as a great lesson to political officeholders, clerics, and Nigerians that they should engage in activities that benefit the public and their welfare.

According to him, this is an excellent man and he lived all his life for humanity, uplifting the downtrodden across the country. I urge you all to emulate his lifestyle. T.B Joshua will be greatly missed.

Responding on behalf of the family, Sarah Joshua, the first daughter of the cleric, commended the state governors and other visitors for their support since the demise of her father last month.