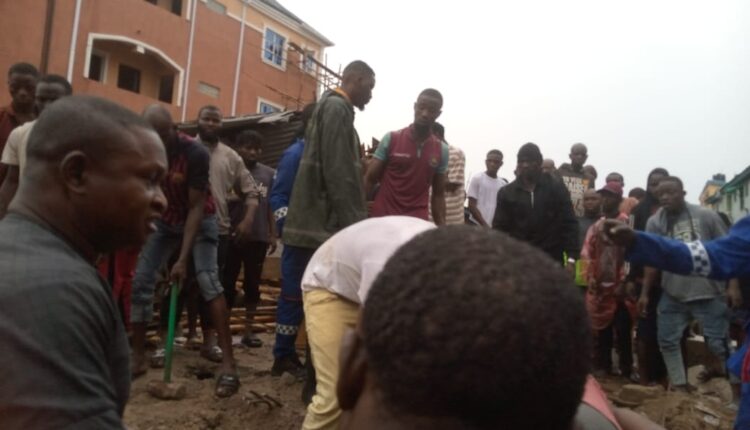 No fewer than two persons have been confirmed dead and dozens of others were said to be trapped under a three-storey building that collapsed in Lagos Island Local Government, Lagos State.

Of those trapped under the collapsed building, two were said to have been rescued by the emergency officials led by the Lagos State Emergency Management Agency (LASEMA).

The ill-fated building was sited at 4, Alayaki Lane, Lagos Island was said to have been captured among the over 200 buildings that were identified by Lagos State Building Control Agency (LASBCA) as distressed and sealed the building.

Oke-Osanyintolu said that further investigation of the building revealed that the developer had continued clandestine operations mostly at night and at the weekends to avoid being caught by LASBCA enforcement officers.

While disclosing that the building caved in during a downpour recorded across the state, he noted that the agency officials responded to the emergency incident at the site which was already in violation of building safety protocols.

Oke-Osanyintolu stressed that before the building collapsed, the officials of the building control agency had directed all occupants to leave and that the owner pull down the structure and not renovate it.

It was learnt that the LASBCA officials served the owners and occupants all statutory notices and sealed the structure to prevent recording casualties.

Meanwhile, The Guild could not ascertain how the developer gained access to the structure after the sealing by the government officials during its enforcement exercise across the state.