UPDATED: How one dies, dozens injure during Yoruba Nation rally in Lagos 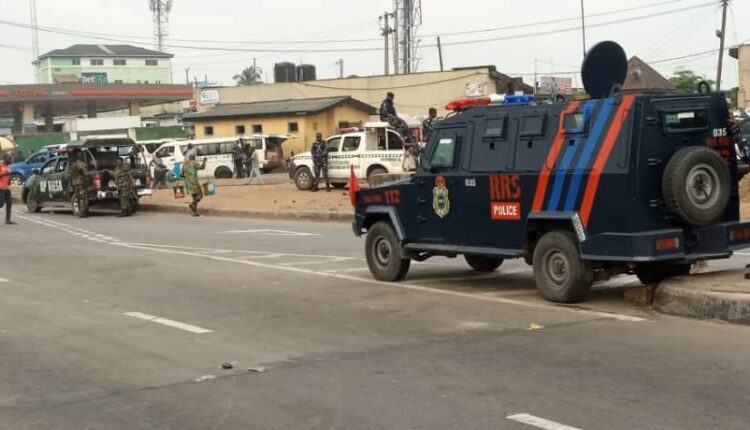 At least one person has died and no fewer than four of the Yoruba Nation agitators have been arrested by Nigerian Police after dispersing dozens of the demonstrators less than 10 minutes after they took over Gani Fawehinmi Park in Ojota axis of Lagos State, demanding secession of Southwest region from the country.

The deceased, a 14-year-old girl, identified as Jumoke, was said to have been hit by a stray bullet, and that she was employed as a shop assistant in Ojota axis of the state.

It was learnt that the deceased, on Saturday, was standing at the entrance of her shop when she was hit by a stray bullet allegedly shot by a law enforcement officer while dispersing the protesters.

The Guild gathered that the protesters ran towards where she standing and that the officers shot at them, but rather than the bullet hitting a protester, it hit and killed the lady.

Aside from the deceased lady, dozens of traders and protesters sustained varying degrees of injuries while trying from been hit by bullets shot by security officers deployed to maintain law and order at the rally ground.

Earlier, four protesters were picked by the law enforcement agencies and kept in a waiting truck, blackmaria, after they shot teargas canisters and blank bullets at the demonstrators to scare them off the premises.

It was learnt that the attack on the demonstrators started on Saturday when the agitators took advantage of the interview been conducted for Commissioner of Police, Lagos Command, Hakeem Odumosu, by pressmen to storm the park and brought out their flags, chanting and reciting the recently composed Yoruba nation anthem.

The protesters, who were armed with different banners designed with pictures of Yoruba activist, Sunday Adeyemo popularly called Sunday Igboho, and other inscriptions to express their displeasure over alleged attack on their relatives across the six southwest states.

Aside that they also demanded secession, the protesters took over a large portion of the Ikorodu, distributing handbills and fliers to sensitize Lagosians and garner more supports for the demonstration across the state.

Realizing that the number of protesters had started increasing, the law enforcement officers attacked them with water cannon and tear gas canisters to prove their earlier threat that no protests would be allowed across the state.

Speaking on the attack o the protesters, Yoruba Self-Determination Groups, Ilana Omo Oodua (IOO), accused the police of been responsible for the act, but hailed thousands of the Yoruba people that defied the Police Intimidation and harassment to show solidarity with the agitation for Self-Determination, saying “the struggle continues.”

The group led by a member of the Nigerian Senate during the Second Republic, Prof. Banji Akintoye, stated that the tumultuous crowd, led by some women and the General Secretary and Legal Adviser of the Group, George Akinola and Olasupo Ojo respectively, were dispersed by Armed-to-Teeth Officers of the Nigerian Police, Army, DSS and Civil Defense Corps with teargas and live bullets despite being peaceful and orderly.

The IOO’s Media Communications Secretary, Maxwell Adeleye, in a statement made available to newsmen shortly after the crowd was dispersed, said: “that the rally took place with thousands of participants despite Police Harassment symbolises that the Yoruba People are not cowards.”

The group saluted the women who led the rally from the front and appreciated the gentlemen of the Media who trooped out to cover the rally despite all inconveniences.

“We want to inform the whole world that a stray bullet fired by Officers of the Nigerian Police killed 14-year-old soft drinks seller at Ojota, the venue of the Yoruba Nation Rally.

“We have held our rally, notwithstanding, the heavy attempts to ensure we do not come to Lagos. That the people came out in their thousands is an indication that the Yoruba People are not cowards. We thank our women who led the rally from the front. May history be kind to them. We thank the gentlemen of the press for their support and solidarity.

“This is the beginning. It is no retreat, no surrender. The struggle continues. We are marching forward in the struggle to liberate our land from the shackles of oppression and intimidation”, the statement, reads.