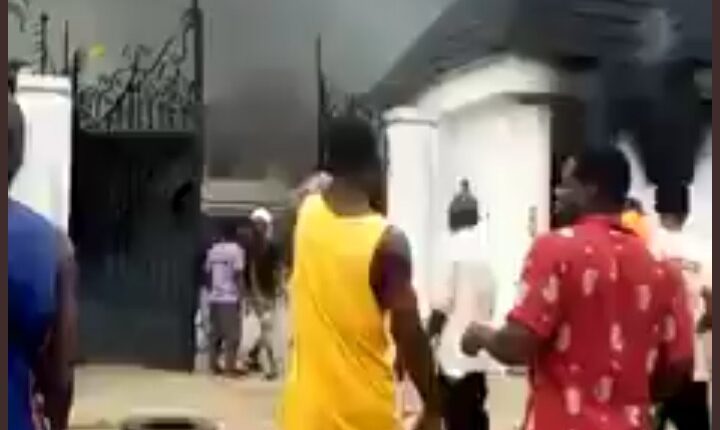 The Imo state governor, Hope Uzodimma‘s house at his hometown in Omuma, Oru East local government was reported to have been attacked by hoodlums that killed two security personnel, set the property ablaze as well as vehicles packed within the premises.

As gathered, the hoodlums, who dressed in black attire, were said to have arrived at the premises with arms at about 11 am, overpowered the security, and set the premises ablaze.

During the face-off between the hoodlums and the security aides on Saturday, eyewitness narrated that one of the security men attached to the house was reported to have been killed.

Following the act, it was learnt that the law enforcement agency deployed a reinforcement team to the community and has taken over the premises to prevent further attacks and looting.

In the video obtained by The Guild, the security personnel, on arrival at the house, shot sporadically in the air to possibly scare the hoodlums away.

Before the attack, it was gathered that the gunmen killed two other security men at Oguta-Mgbidi Junction, a road that leads to the governor’s country home.

Confirming the attack, Commissioner for Information and Strategy, Declan Emelumba, stated that two security men at the governor’s house lost their lives during the attack.

Of the two security aides, the commissioner noted that one was a Nigeria Security and Civil Defence Corps (NSCDC) officer and that they lost their lives preventing the attackers.

“At about 9 am today, Saturday, April 24th, a group of hoodlums numbering about 15 driving in a motorcade of three vehicles accompanied by a tipper loaded with used tyres, stormed the country home of the governor in Omuma, Oru East LGA and attempted to burn down the house.

“However, vigilant security operatives attached to the Governor’s house successfully repelled the attack and consequently minimised the damage they had planned to unleash.

“In the crossfire that ensued a few casualties were recorded. Preliminary investigation suggests that the foiled attack may have been politically sponsored.”