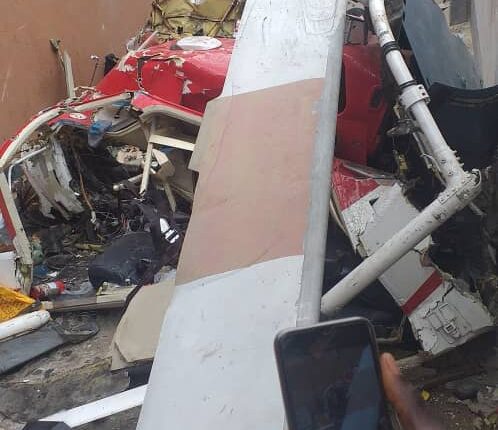 No fewer than two persons have reportedly died and one person said to have been injured after a helicopter operated by Quorom Aviation crash-landed into a residential building in Opebi, Ojota axis of Lagos State.

It was learnt that chopper pilot was conveying two passengers to a destination in Lagos from Port-Harcourt when the crash occurred around 12.17 pm at No. 16, Salvation Road in Opebi, area of the state.

Confirming the incident, the Lagos State Emergency Management Agency (LASEMA) said that the injured person has been resuscitated and taken to the Intensive Care Unit of the Lagos State University Teaching Hospital (LASUTH) for urgent attention.

LASEMA General Manager, Olufemi Oke-Osanyintolu, through a statement released on Friday, said that the victims of the accident have been deposited in a mortuary while investigation was still ongoing.

“The helicopter was carrying three people, one is in the intensive care unit at the Lagos State University Teaching Hospital, while the other two were killed on impact and their bodies have been deposited in a mortuary. We are on top of challenges, especially crowd control. The operation is ongoing and updates will follow,” the statement read.

Also, the Accident Investigation Bureau (AIB) said that personnel of the bureau have been drafted to the scene of the incident to unravel circumstances that led to the crash.