As part of the move to restore peace within All Progressives Congress (APC) and eliminate leadership crisis rocking the house, the National leader of the party, Asiwaju Bola Tinubu, selected members from the APC newly constituted caretaker committee and chairman of Progressive Governor’s forum, Abubakar Bagudu, have been confirmed to be in a closed-door meeting at the national leader’s house in Lagos.

Although, the meeting agenda is yet to be disclosed but cannot be outside the crisis that has almost divided the house before the dissolution of National Working Committee (NWC) of the party a week ago by President Muhammadu Buhari. 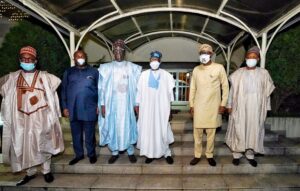 Addressing newsmen after the meeting, Tinubu stated that the crux of the discussion at the meeting was on how the party can become more accepted by Nigerians and sustain its core progressive values that brought it to power in Nigeria.

The national leader stated that there was no fight within the party and that the committee was not at his residence for reconciliation rather were on a consultation to acquire solutions that can assist the party win upcoming elections in the country.

Tinubu said: “We have no differences to be sorted out in the APC, we just had a consultation and it is how our party, the APC would continue to be a progressive party”.

He explained that the committee would have been for reconciliation if members of the party were fighting but were on consultation because APC members disagreed on issues.

While describing members as erudite scholars, the Lagos former governor stated that it was only a political party where members do not understand their rights that there would not be disagreement over issues.

“There are instances when you disagree but it does not indicate that you can not discuss it over and be a good example in leadership and politics”, he added.

Tinubu said politics without seeming media crisis would be less interesting and that what was very important after the crisis is members’ commitment towards building the party to achieve more laurels.

“The question is are we committed to building this party and Nigeria, that is what we are all about. We are steering the ship of our nation and our party in the right direction”, Tinubu said.

He said the party leadership has trust and respect for the chairman of the caretaker committee and willing to support him to succeed for the party to continue in its progressive governance of the country.

Chairman of the committee,  Buni, who led other members to the meeting said the series of meetings are all part of the consultation the committee has set out to achieve.

According to him, you all know the task before us is daunting and we need guidance, experience, and prayers from our leaders.

Also responding to question, the host governor, Sanwo-Olu said: “I am a good host, I am happy to have my colleagues here, it been a very fruitful discussion we’ve had here this evening, “Sanwo-Olu said.