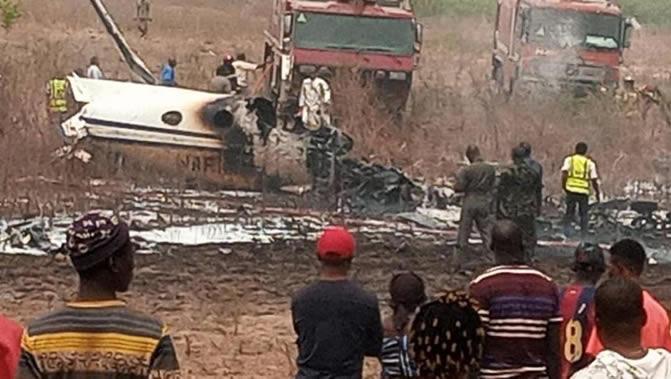 No fewer than seven passengers onboard a Nigerian Air Force NAF201 Boeing 350 aircraft may have been confirmed to have died after the plane crash in Federal Capital Territory (FCT) Abuja.

As gathered, the aircraft, which departed Abuja at 1033UTC with seven Airforce officers aboard including two crew, crashed barely 15 minutes setting out to leave the runway for Minna, Niger State.

It was learnt that before the plane crashed on Sunday, the pilot had reported engine failure at time 10:39 and crashed landed on the final approach path of Abuja Runway 22 at time 10: 48UTC.

An eyewitness narrated that the ill-fated aircraft hovered for several minutes on air with the pilot trying to avert the crash but could not get to the airport before the plane went down.

The eyewitness, a lady, added that immediately the plane crashed, a loud bang enveloped the air, and fire emanated from the accident scene.

She said: “The deceased pilot should be commended for his bravery because he tried to avert the crash but I guess the plane was faulty and could proceed to the expected destination. I believe that he is an experienced pilot”.

Confirming the accident, the Minister of Aviation, Hadi Sirika, and Chief of the Air Staff (CAS), Air Vice Marshal Oladayo Amao, in a short message, stated that seven persons were aboard the flight.

Sirika said: “A military aircraft King Air 350 has just crashed short of our Abuja runway after reporting engine failure enroute Minna. It appears to be fatal”.

Amao added that the crash occurred while returning to the Abuja Airport after reporting an engine failure enroute Minna where the seven airforce officers were meant to complete an assignment.

While noting that the first responders were at the scene, he disclosed that seven personnel on board died during the crash of Beechcraft KingAir B350i aircraft.

“Sadly, all 7 personnel on board died in the crash. I have ordered an immediate investigation into the incident; just as I urge the general public to remain calm and await the outcome of the investigation. I want to use this medium to commiserates with the families of the deceased”.