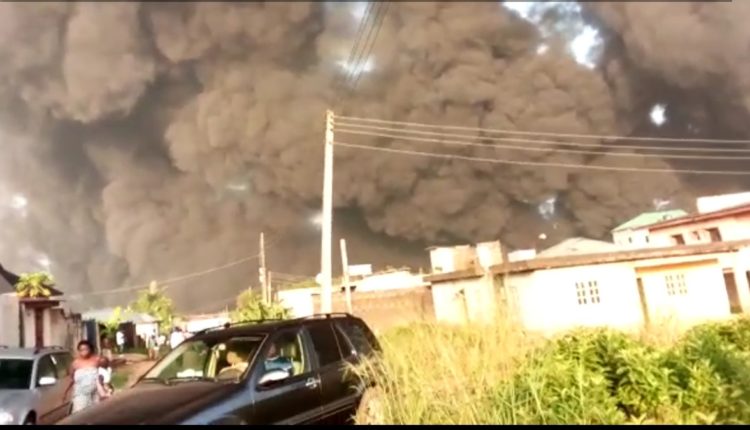 Atleast one person has been confirmed dead and scores injured when a pipeline exploded within Gloryland Estate in Isheri-Olofin, Lagos State on Thursday.

Sources said that the deceased was a vandal who could not escape when the pipeline exploded within the community.

Following the explosion, pandemonium broke out in the community when deafening sounds and heavy fires emanated from the explosion scene.

The Guild gathered that residents flee the community when they discovered that the entire community had been enveloped by thick smoke oozing out from the explosion scene.

The Public Affairs of the Lagos State Emergency Management Agency (LASEMA), Nosa Okunbor, disclosed that the vandals ruptured the pipelines at four different points within the community.

Okunbor said: “Upon the arrival of the Lagos response Team (LRT) as well as other emergency responders at the incident scene, it was observed that pipelines located within Diamond Estate/idowu Egba was ruptured and spilling petrol which resulted to a fire outbreak in four (4) points”.

According to the Public Affairs Officer, unfortunately, one male adult was seen at the scene of the explosion already burnt to death. Despite that, rescue and recovery operations are still ongoing.

Though no one could ascertain the number of casualties, some residents narrated that about two persons died and several others injured.

Our correspondent learnt that those injured sustained the injuries while fleeing the community to prevent been caught in the explosion that rocked the community.