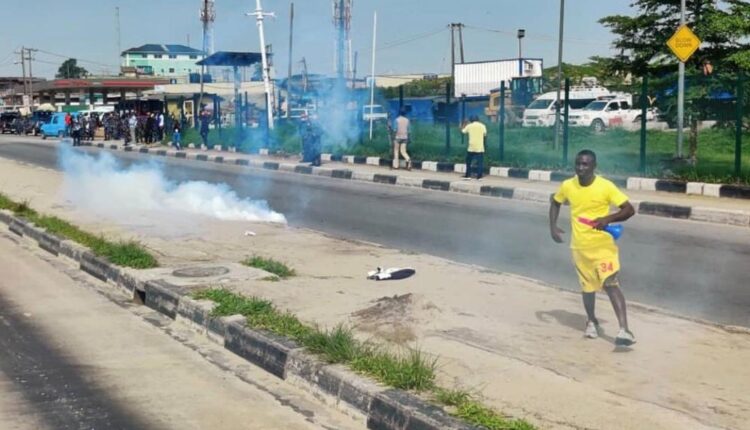 Atleast three persons including a journalist were reported to have been arrested and hundreds of youths, artisans, and women demonstrating in Federal Capital Territory (FCT) Abuja, Lagos, and Osun States have been forcefully dispersed after Nigerian Police officers attacked and fired teargas canisters at the peaceful protesters to ensure they discontinue their procession.

The journalist, identified as Samuel Olubiyo, a staff of an online media organisation, was said to have been picked while recording the attack and was already detained at the Akpo Police station in Abuja, however, the two others were arrested in Lagos.

It was learnt that the Nigerian Union of Journalist (NUJ) have begun to demand that the reporter, who has whisked away by the law enforcement agency, be set free unconditionally without delay.

As gathered, the protesters, under the aegis of #Buhari Must Go initiative, commenced their demonstration around 08:30 am in Abuja, marching towards the seat of power peacefully, but less than an hour after the activities commenced, the law enforcement agency arrived and attacked them, forcing many to scamper for safety.

Before they were dispersed during the demonstration to mark this year’s democracy day celebration, the protesters, who gathered under the movement conveyed by former presidential candidate, Omoyele Sowore, lamented over the state of insecurity and other policies adopted by the current administration over the years.

The protesters, who armed with different placards bearing their displeasure over the Buhari-led administration policies and programmes, chanted “Buhari must go”, “Say no to injustice”, Free El-Zakzaky, and other phrases.

Addressing the protesters, one of the activists, Ademola Olanrewaju, in an interview with newsmen, disclosed that they were attacked by the law enforcement agency that was created to defend the people whose taxes were used to fund the government.

Olanrewaju described the system of government been practiced in Nigeria as not democracy, saying democracy recognize freedom of speech and rights to association and others but in Nigeria, that is not the situation.

The Unity Fountain in Abuja, which is a popular venue for protests in the nation’s capital, had been shy of the pro-democracy protesters but the venue was made available for the pro-Buhari supporter under the banner, I Stand with Buhari.

Meanwhile in Lagos, the protesters, who marched from Ogudu axis to Freedom Park in Ojota, were attacked by the law enforcement agency for allegedly gathering unlawfully without requesting a permit from the Nigerian Police.

No fewer than five protesters, who joined their colleagues to demand an end to bad governance when they were tear-gassed by the security operatives, were said to have been picked from where they hide after officers of the Nigerian Police deployed to the scene shot at them, following the demonstrators’ refusal not to march on Ikorodu road.

Confirming the arrest, the Commissioner of Police, Hakeem Odumosu, told newsmen that the five persons were arrested in front of Gani Fawehinmi’s Park (GFP), Ojota and that they have been released.

He said: “As at now, no suspect is being detained in connection with the protest. I want to emphasise that no single person is in Police custody as a result of the protest (as at 1.30 p.m. press time). Five persons were arrested at Ojota, I ordered my men to release them. I thank God no one was injured, no vehicle was damaged,”

Odumosu said the Police had nothing against protesters as long as they were peaceful in their conduct, stressing that the only thing he requested from them was information about their protest, not permit order.

Meanwhile, in Osun, the demonstration was peaceful with the protesters gathering in Oshogbo, the state capital, to request for their rights and express displeasure over happenings across Nigeria, to ensure they discontinue the protest.

During the demonstration to mark June 12 democracy day, the group, who started their demonstration at Oke-Fia roundabout about a kilometre from the Government House, described the day as one that symbolizes resistance in the history of Nigeria and no government would stop the masses from expressing their grievances.

Addressing the gathering, Waheed Saka, one of the conveners, added that Police must be protected from gruesome killings and if the president is tired of governing the country, he should resign. 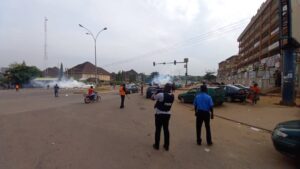