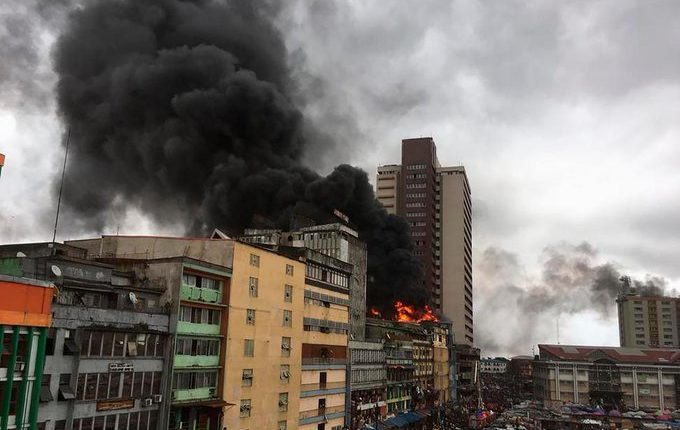 Goods worth millions of Naira were on Wednesday destroyed and traders displaced when fire gutted a four-storey building beside Great Nigeria Limited in popular Balogun market, on Lagos Island, used as plaza.

At the time of this report, the inferno was still raging and several traders wailing, urging officials of Lagos state fire service to intensify efforts in putting out the fire to save their goods from destruction.

Others traders, who could have access to their goods it was gathered, are currently trying to remove their goods to safer places.

The name of the burning plaza gutted by fire, theGuild gathered, is Anambra Plaza sited on Martins street end of the market.

It was gathered that before emergency officials arrived, the inferno had spread to six other buildings within the axis, leaving emergency officials with no option than to prevent the fire from spreading rather than concentrate on putting it out completely.

One of the building, our correspondent who visited the scene observed that one of the affected buildings has collapsed after been gutted by fire

“On arrival at the above scene, it was discovered that a four-storey plaza had been gutted by fire. And it has escalated to adjoining buildings totaling seven (7) in number and now is being contained by the Emergency responders i.e LASG Fire Service and the Federal Fire Service and NPA Fire Service.

“All responders are on ground and progress is being made. We urge for calm and will provide further updates,” he added.