No fewer than 11 members of the Indigenous People of Biafra (IPOB) and the Eastern Security Network (ESN) were reported to have been killed by a joint team of security operatives, including the Nigerian Army, Air Force, and the Police in Imo State.

The secessionists were said to have been killed during a gun battle with operatives who resisted their attempt to attack a Police Station in Orlu, axis of the  State.

It was gathered that the assailants were repelled on 6 May 2021 during a face-off that lasted for hours with no record of the joint security operatives’ death.

Confirming the incident, the Director, Army Public Relations, Mohammed Yerima, in a statement on Friday said seven vehicles, assorted ammunition, and other items used for the attack were recovered.

Yerima said: “A gang of IPOB/ESN terrorists mounted in vehicles on Thursday, 6 May 2021, stormed Orlu town with the intention to attack the compound housing the Area Command and Police Station in Orlu LGA of Imo State.

“The attackers were resisted by vigilant police personnel at the Area Command and were completely obliterated when a reinforcement team of the Nigerian Army and Nigerian Air Force arrived at the scene.

“The assailants, who had been on the radar of the Joint Technical Intelligence Team, were said to have come from a Forest Camp in Ideato North LGA of Imo State, from where they mobilized and planned the failed attack.

“Following the encounter, eleven IPOB/ESN Terrorists were neutralized while four AK47, one G3, and one Pump Action rifle, as well as a Berretta pistol, charms, and assorted ammunition, were recovered. All the seven operational vehicles used for the attack were demobilized and as such the remaining terrorists escaped on foot with fatal injuries.

“There were no casualties on the side of the security forces. Law-abiding citizens in the area are advised to look out for strange persons with gunshot injuries and report same to the nearest security agency for the safety of their communities.” 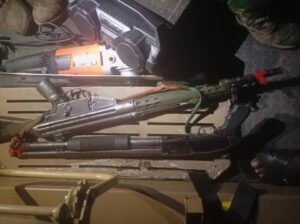